Ahhh, where did the time go?

Things picked back up at work, which included an uptick in ordering more science fiction novels and nonfiction titles, and involved reading a few more titles than usual just to keep up with the hottest authors and current topics.

That all means I'm still promoting a narrow list of things I liked most this past 2021. This has actually taken me longer than usual because I really couldn't figure out a Best Fiction novel to choose from even though there were a couple I liked well enough. Rather than leave the category empty I had to think it over. So here goes.

Zoey Punches the Future In the Dick, David Wong

There's a trope called Exactly What It Says On the Tin, where if a book title reads "Kaiju Fighting Robots" and there's 50 foot monsters fighting 50 foot robots, then HELL YEAH that's what we're looking for. And this novel goes exactly into the zany, hyperkinetic comic book craziness the title tells us it'll do.

It's Halloween season in a crazy superhuman-filled metropolis where Zoey - a young woman turned criminal overlord - gets attacked by a zombie claiming she's responsible for its death and an impending apocalypse. Now targeted by other crime lords who don't like Zoey's attempts to convert her empire into a force for good - as well as a new threat calling itself the "Vanguard of Peace" - she has to solve this mystery, get prepped for Halloween, avoid cyborg cats, and survive to the next novel in this new crazy-ass series.

Written by the guy who brought us John Dies At the End and This Book Is Full of Spiders, this book - sequel to Futuristic Violence and Fancy Suits, which I hadn't actually read yet, I only ordered this book for my library because the title was hilarious - does a good job of creating its own world with quirks and decent literary twists. It does provide relevant commentary on the horrific nature of online trolling and the emotional toll it takes on its victims, as Zoey copes with a threat calling itself Blowback that turns out to be just a handful of loathsome trolls who don't represent anybody but themselves. If you're trying to find something to read that's not as ponderous as most of the current sci-fi / fantasy market, this could be a fun alternative.

The Cruelty Is The Point, Adam Serwer

A lot of the non-fiction books I've read and place here on my blog as best reads all happen to document the rise to power of one donald trump, a bankrupt businessman/con artist who rose to the Presidency on a mountain of lies and a broken political system that let him bluff his way in. Where most of those books documented the atrocities trump committed once in power, Serwer - writer/editor at The Atlantic - takes a larger view to examine the mental state of a nation that willingly accepted this overt bully/demagogue promoting an agenda driven by Cruelty as his platform. Anchored by the essay that gives this book its title, Serwer delves into the various racial and sexist world-views underlying the American psyche, and exposes the rage and hate that trump and his ilk feed on for profit and power. As important a read as any other books on trump's violent rhetoric and abusive behaviors.

Similar in focus to Serwer's essays, Kendzior documents not only trump's psychosis but also looks at the parts of America - the Red State regions abandoned by an American culture and economic system of the 21st Century that they distrust out of religious and racist world-views that dominate there - that are never going to accept the more liberal Blue State regions that cannot comprehend how those regional Americans are so hate-filled and contrarian.

Normally I'm a Batman fan first and foremost, but lately there's been a lot of great work done with Wonder Woman as the primary hero of the DC Universe, and it's all capped by this recent release on the Black Label (magazine) format, a massive retelling of the origin of that comics' universe Amazon culture, the emergence of Wonder Woman's mother Queen Hippolyta, and a war between gods and genders.

What's knocking everyone off their feet is the work Jimenez put in as the artist. Arguably one of the most detailed illustrators in the business, inspired by greats like George Perez and drawing in a similar style harking back to Perez's tenure on Wonder Woman in the late 1980s, the first issue already has been hailed as a masterpiece of graphic art. 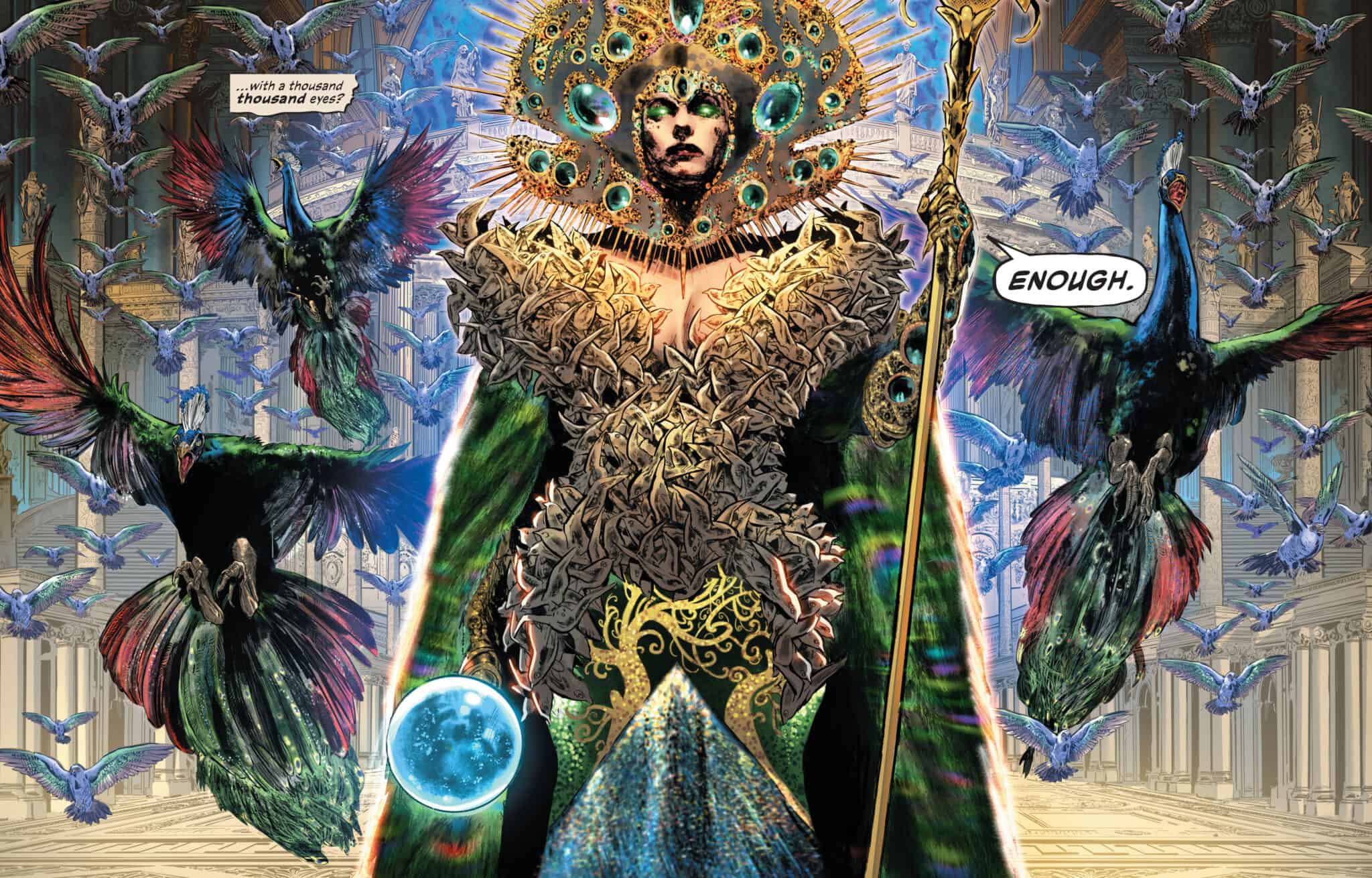 While less a story about Wonder Woman and more about the history - hence the title - that would lead to her "birth" as the Amazons' princess warrior, there is well enough here to entice readers who don't even follow comics to pick up the title. Like most Black Label works, this is NOT a comic book for children and its depictions of abuse gets brutal (given the themes of male-on-female violence, this is unavoidable).
And again, the artwork on this is incredible: Any one panel of Jimenez's art could stand alone as a framed work on museum walls. This is arguably the best-drawn comic in ages.

Best Work by Someone I Email, Tweet, or Chat With on a Regular Basis

Guns of the South, Harry Turtledove

One of the few advantages of Twitter is that well-known authors occasionally take to the tweets to make their voices heard on the issues, and Mr. Turtledove is one of them. As a writer of Alternate History (AH) novels - and with an academic degree in Byzantine History, which does explain a whole lot of his interest in What-If narratives - he does have knowledge about the rise and fall of empires/civilizations, and if anything the 21st Century political landscape is full of that requiring his observations. So tweet he does, and often I tweet/retweet his stuff with follow-up commentary by him, so it's all good.

That said, Guns of the South is one of Turtledove's better-known What-If novels: The Confederate army under General Lee is facing defeat in early 1864 due to lack of supplies and lack of rifles. A group of men calling themselves "America Will Break" (AWB) show up with an offer of a new, rather lethal weapon they call the AK-47, more advanced and deadly - and literally futuristic - than the Union repeating rifles. Along with oddly packed rations most 20th Century people would recognize as Cold War-era MREs and guarantees of unlimited supply of both, Lee accepts the deal... and leads to the South utterly defeating the North within weeks. With this sudden change of history - where Confederate success means their dreams of a slave nation continue - the timeline we know of by the 21st Century becomes a darker, more treacherous place... especially when Lee and the other Southerners find out who the AWB really are and what they really want.

What makes Turtledove's efforts here intriguing is how he doesn't fall into the traps most other AH/What-If authors fall into: The one little "For Want of a Nail" moment doesn't always end up with clean and unrealistic happy results that bad AH novels fall into. For all that the AWB hoped for - that their time-travel events would create a slave-controlling empire that would ally with them in a future war of their own making - it doesn't change the historic global trends of slavery getting outlawed. Indeed, the European powers - Great Britain especially - that hesitated siding with the Confederacy against the United States now have a reason to openly oppose the new Confederate nation that still propagates a slave system. Defeating the Union doesn't stop slaves in the South from fleeing for safe havens further north. And for all that slavery did promoting racism in the United States, the AWB's more hateful views become shocking to Southerners who prided themselves on more genteel behavior.

Turtledove's novels cover a lot of major historical events - the American Civil War, World War II (he comes up with some doozies for "Hitler Wins" scenarios including lizard aliens), the Age of Exploration, etc. - so he has a bunch of novel series to go through. It'll be worth a look.

Best Work Including Stuff I Wrote

Many thanks again to the publishers at Mystery & Horror LLC, who accepted this year a story about 2020 aptly titled "War Of the Murder Hornets." It's about Murder Hornets, a legitimate imported death machine from Asia that contributed to a lot of madness the previous year (and are still around as a looming threat). Because 2020 was worth that kind of horror.

In the Running: ALA Councilor at Large

I've mentioned a few times before that I am a professional librarian.
This isn't just about working full-time as a reference librarian: Professionalism requires keeping up with the skills and training, as well as contributing to the job title by engaging in regional, state, and national organizations.
I've been very active with the Florida Library Association, working on committees ranging from establishing Standards And Outcomes for our public libraries to maintain their ethics and professional standards, to the Scholarships committee that rewarded funding to new students to our MLIS programs at public universities (Florida St. and South Florida).
I've also been with the American Library Association, paid member since 1993 (my graduate student years), and had been active within the ALA with Reference & User Services group from time to time.
All this to say that for 2022 I'm hoping to be more engaged with ALA by running for a Councilor-At-Large position.
From the ALA press release, thank you Sheryl Reyes:

CHICAGO - The American Library Association (ALA) announced that 68 candidates are running for 34 at-large seats on the ALA Council.
The following candidates were accepted by the Nominating Committee (listed alphabetically by last name):

I am campaigning on the pledge to 1) uphold library standards of public service, 2) uphold librarianship's three rules of Time And Space, and 3) the judicious application of library ninjas to hunt down overdue patrons.
I kid a little. I am campaigning on promoting effective public service, and to ensure our libraries support our communities so that our communities can support us.
Balloting for ALA elections begins on March 14, 2022 and will run through to April 6, 2022. Individuals must be members in good standing to vote in the 2022 ALA elections. I also need to make sure my membership dues are in to remain a candidate.
For my fellow ALA librarians out here, I hope I have your vote. It'll be a tough election with 88 candidates for 34 openings. We'll see how it goes!
Thank you for your consideration!
Posted by Paul at 12:17 PM No comments: