With almost a full year clocking as a full-time librarian again surrounded by books, books, dvds and more books, it's about time I finished up for this calendar year and promote another year end book review!

To be fair, the rules have changed: during a period when I was out of libraries and relying on my own time and pace for books worth reading/promoting, I pretty much covered any title I'd read over the years to fulfill the Best Fiction, Best Non-Fiction, Best Graphic Novel et al.  This time, I had a whole library to work with (insert grin here), so this time I will focus on the books released this 2013 for once.


The Ocean At the End of the Lane, Neil Gaiman.
Ever since the Black Orchid 3-parter really, I've been into Gaiman's literary style: knowing the fantasy tropes of superheroes as well as magic, playing and deconstructing stories and then putting them all back together again for the sake of the story itself.  Although Mike Bruscell had to remind me when Sandman came out it was the same author and worth pursuing.
Ocean was the first book in a few years that was geared more for adults - Gaiman's last few were juvenile/young adult - and it's a flashback-based tale of a mid-40s man returning to the place of his youth drawn by a re-emerging memory of what happened when he was seven.  A lonely young boy who gets befriended by a girl living on a farmhouse with her mother and grandmother who talk nonsensical (anyone familiar with Gaiman knows the trope he's playing with here) but who are at least the only other ones aware that an inter-dimensional monster has arrived in their corner of the world.  While this monster is disruptive, it's easy to deal with... problem is that monster causes a mess that brings nastier monsters into the world to clean up...
All of Gaiman's favorite tropes are on display here - the love of cats, the vastness of the universe, the magic of perception, the monsters that try not to be monsters but just can't help themselves - as well as a sense of this being a personal tale, related very much to the author's own childhood and to a sense of loss when that childhood ended.  It's a very good book to read.
Also, when I named my new cat Ocean... well when you read the book you'll understand why.
Runner-Up (I think I do this once in awhile): The Human Division, John Scalzi

The United States of Paranoia, Jesse Walker
I get into conspiracies, but for all the right reasons...  Growing up I read books about UFOs and ghosts and the Bermuda Triangle and Loch Ness Monster, the strange and unusual, upon which I noticed the bits of conspiracy and cover-ups surrounding some of the events.  By my middle-school years I had "graduated" to more serious stuff like JFK's assassination and the Church Committee findings.  While reading these conspiracy theories I quickly grew to recognize the folly behind a lot of them: some of the conspiracies get so convoluted in their setup and explanations, and relied on thin wisps that half the time weren't even real, that they made little or no sense (sometimes the simplest explanation is the correct one).
This year Walker came out with a book reviewing the prolonged, twisted history of conspiracy thought in the United States itself: the fact that even since our colonial days, our society has been fearful of "the outside threat", the shadow figures below or above us, the belief that someone or some group had it in for our own, for our nation and communities.  Walker does his best to explain the mindset of how perfectly rational people would believe irrational conspiracies: the make-up of the American mindset that allows us to handle the real world while believing that alien shapeshifters from the moon Europa are harvesting our ova.  At least, Walker tries to explain: I think it's all a plot... yes a plot...


Hyperbole and a Half, Allie Brosh

It's not the most beautifully drawn work in the universe, but Brosh writes in a clear, refreshing, horrifying fashion.
Taken from her ongoing blog, each chapter delves into a particularly unusual moment during her life or delves into particularly painful observations.  Above all, for me, are the moving two-parter chapters she writes about her chronic depression: arguably the most insightful, illuminating description of what depression is really like and why it is so hard for those of us enduring it to ever explain it to people who never experience it.  Where the character representing Brosh describes the emotional void/distance that overwhelms you... the flatness of your emotional state itself... Look, these words I'm using barely even describe it right.  Brosh's words do.

Saddest Thought That is Going To Bother Me Forever


Elmore Leonard is dead and I'll never find out if Foley and Sisco ever get back together.

Best Humor-Horror Anthology That Includes A Short Story I Wrote


Strangely Funny, Sarah E. Glenn (editor and submitter)
Okay, so I'm shilling my stuff!  Glenn and co-editor Gwen Mayo were kind enough to add "I Must Be Your First" into the first anthology printing from their Horror & Mystery LLC publisher.  Some of the stories I found very good - "Best of Taste" by Edward Ahern, "One Scareful Owner" by Catriona McPherson, "Criticus Ex Machina," by Glenn - and some of the others very dark and unsettling.  Some of the online reviews on Goodreads have been okay... but I'd... we'd like to get a few more... especially with 4 or 5 stars attached! 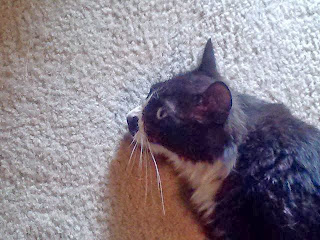 This is the cleanest picture I can get at the moment.  The cat is damn wiggly.

The month before Halloween, Tehya my Pretty Kitty developed a severe case of lung cancer and I didn't realize it until it was too late the week before.

It had been two years since I lost Page my Silly Kitty to skin cancer, the Monday before Thanksgiving.

On Halloween night, sitting around my apartment complex - in an empty place - wondering where all the trick-or-treaters were, I hear this meowing.  At the base of the stairs was this little kitten, clearly hungry, wanting attention and food and love.

With nothing else to do, I raced out to Publix for packets of cat food, paper plates to put 'em, and put the food out.

A trio of cats emerged from the bushes to partake, and before I knew it me and my neighbors had settled into taking care of two cats, the meowy kitten and an older (by a year) grey cat.  Both of them were literally skin and bones.  We fatted them up and they were content.

The black-and-white kitten quickly grew brave and learned to race up the stairs to my apartment, and finagled his/her way in past the door to check my place out and recognize I had cat toys still about, and got to wiggling about on the floor contented and purring.

After more than a month of doing this and finding out no one else had reported a missing kitten or twelve, of figuring out the poor things were most likely abandoned - ferals are NEVER this friendly - and in need of a home, noting I only had the budget for one cat to join me, I succumbed to the inevitable that the kitten I had nicknamed Wiggle was my cat, and took him/her today to the vet to proceed adopting it.

The nurses told me Wiggle was a girl cat.

Wiggle is more nickname than name.  I needed a good girl cat name.  The nurses suggested I get one from a book.

My smartphone has ebooks on it.  I opened up my Nook reader and the first book up was by Neil Gaiman.

Her name is now Ocean.  If you've read Neil's book, you'd know why.

Anniversary: Twenty Years Ago, I Became a Master...

We've come up on the moment in my life I officially achieved Librarian certification...

I earned my Masters degree in Library and Information Science at the University of South Florida (GO BULLS) on December 14, 1993, after a rushed year and a half of 36 semester hours, graduating with a 3.75 GPA, all As and Bs.

Within a few weeks I got a part-time job at the Clearwater campus of St. Pete JC (now a full-up college with 4-year programs), which lasted until April 1994 when I got a full-time job offer with Broward County Libraries for their new North Regional branch in Coconut Creek.

More crazy years hopefully yet to come.
Posted by Paul W at 9:10 PM No comments: 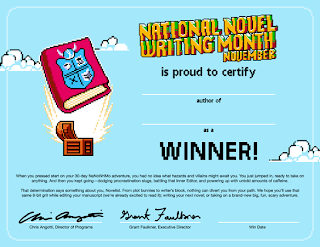 Next step: surviving a December, January, February, and March of finishing and editing the works I've started.  Sigh...
Posted by Paul W at 9:42 AM No comments: