Someone's gone and done a YA novel about Library Ninjas... 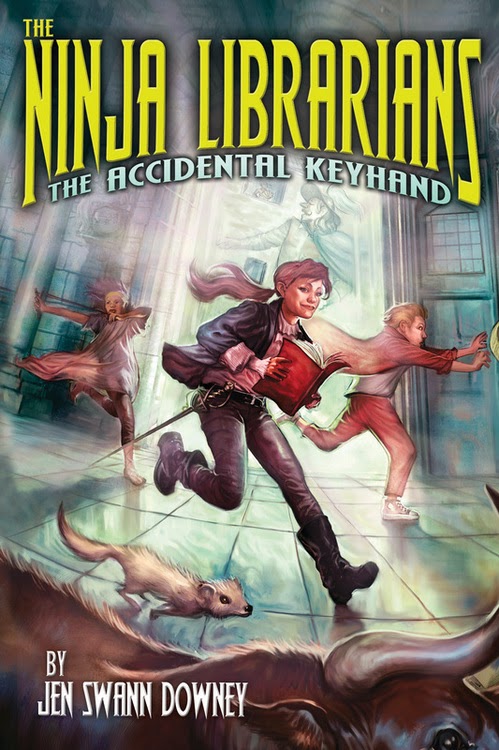 I oughta be kicking myself though.  I've been thinking up of the need for library ninjas since the 1990s when I wrote my American Libraries humor article about squelching book theft.  Which led into my "Overdue" short story in my Grapefruit Wars anthology...  Shoulda known there could be a market for a full book.

I still got the market cornered on cyborg ninjas battling exploding space penguins...  wait, don't start writing that out!  NO!  MY IDEA, MINE!  Aaaaaaa (rushes off to power-type during this Memorial Day weekend)

Posted by Paul W at 11:00 AM No comments: Links to this post

...and I may stick them to this blog.

There's this whole Pages option over here on the Menu I MUST try out...

And there's one set of pages that is entirely apropos.... bwhahahahahahahaha
Posted by Paul W at 8:44 AM No comments: Links to this post

I had a part-time Library Adjunct position at the St. Pete Junior College Clearwater campus off Drew St. at the time.  It was nice, working the reference desk, helping students get on the CD-ROM databases and look for books in the two-story building.  I had just gotten my Masters degree in Library and Info Sciences at University of South Florida (GO BULLS) and was hoping to find a full-time spot at an academic-level library.

While it wasn't an academic library, I got a call from Broward County Libraries to interview.  The county system was this large, spread-out system that used regional libraries as nexus points for the smaller community libraries that dotted the packed urban/suburban landscape.  They were going with a novel idea at the time of sharing the large regional libraries with the Broward community college campuses.  They were building a brand new building for the BCC North Campus, and needed full-time staff to cover the expanding Reference desk (BCC provided two existing librarians to staff the desk as well).

I had scored well on the civil service exam I took at the ALA convention back in 1993 apparently, and passed the phone interview well enough to get the face-to-face.  They had asked me to bring my MLS degree with me so they could photocopy it.  Foolishly, my parents already paid for it to get framed and we couldn't get it out of the mounting... so I lugged this bulky framed degree under my arm into the interview where I got hired.

And then it was May.  My parents helped me move down from Pinellas County.  May 8th was my birthday (and also Mother's Day, which we celebrated at a nice restaurant, I forget where now) that Sunday.  I was twenty-four years old.  And then Monday May 9th I started my first full-time job at North Regional Library.

The library itself was already open, at least on the first floor where the college students used the computer lab and study rooms available to get their work done.  Reference was on the second floor, and there was still a lot of work to get done before the official opening in June.  Books still to unpack and shelve: the county library system shipped us boxes of used, moldy reference books from a defunct East Regional library that had gotten flooded out.  We spent three days trying to integrate those books with their bad Dewey numbers and worse book bindings before our bosses were able to argue to the county to get rid of those poor things.

We had to set up our desk policies and our shifts.  We had to undergo a crash course on the weeding policies that Broward County required.  Our assistant reference department head at the time was very strict about collection management: I could never convince her that the college students we'd be getting would need history books on specific time-frames (to her, a book covering just one year of history wasn't for us: she seemed to think broad history books were the only ones worth having...).  She was right about weeding out travel books as quick as possible, though...

It was my first full-time job.  In a brand-spanking new library building with this open stairwell and pretty glass-framed sculpture dangling from the ceiling.  I had my own workdesk.  We shared two staff computers using WordPerfect 5.1 and then 6.0.  We had a spacious staff lounge, fresh carpeting, chairs with rollers...

It was twenty years ago.

A lot changed since then.  I've been to other branches in Broward County Libraries since then, and then went up to Gainesville to work at the University of Florida for a few years (my other alma mater, where I earned a Bachelors in Journalism).  From there I worked at Pasco County for some time, until that all went sour in the wrong ways and I found myself unemployed for four years (!) before Bartow in their infinite mercy hired me on as their reference/computer expert.  Where I hope I am flourishing.

North Regional, though, remains a fond memory, a good start to my career in libraries.  They're hosting a 20th Anniversary celebration in June.  I'd like to attend just to see the place, see any familiar faces, say hellos and farewells and whatnot.

I just wonder if they ever increased the Jamaica history book collection.  I had a hard time finding more books to order to fill the demand...

Posted by Paul W at 10:26 AM No comments: Links to this post 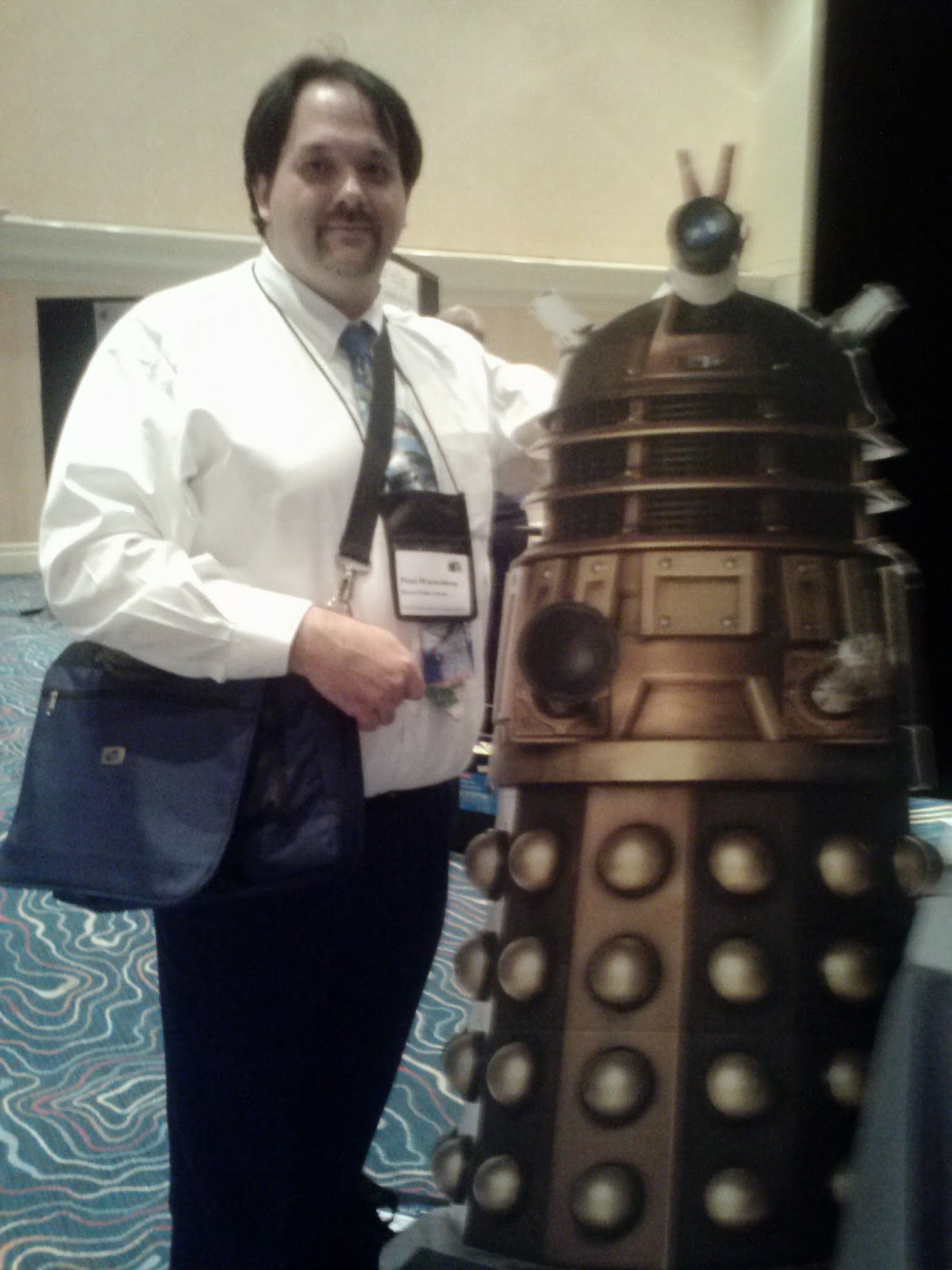 I'm here to learn about outreach, marketing our library services, and how to pose with cutouts of Daleks.

Every first Saturday of the month of May... it's...

Considering this is my birth-month, a good reason to go out and mingle with the cosplayers...

Pictures forthwith, so stay alert on Twitter and Facebook.  And here at the end of the day.

Update: as warned, I have returned with PICTURES! 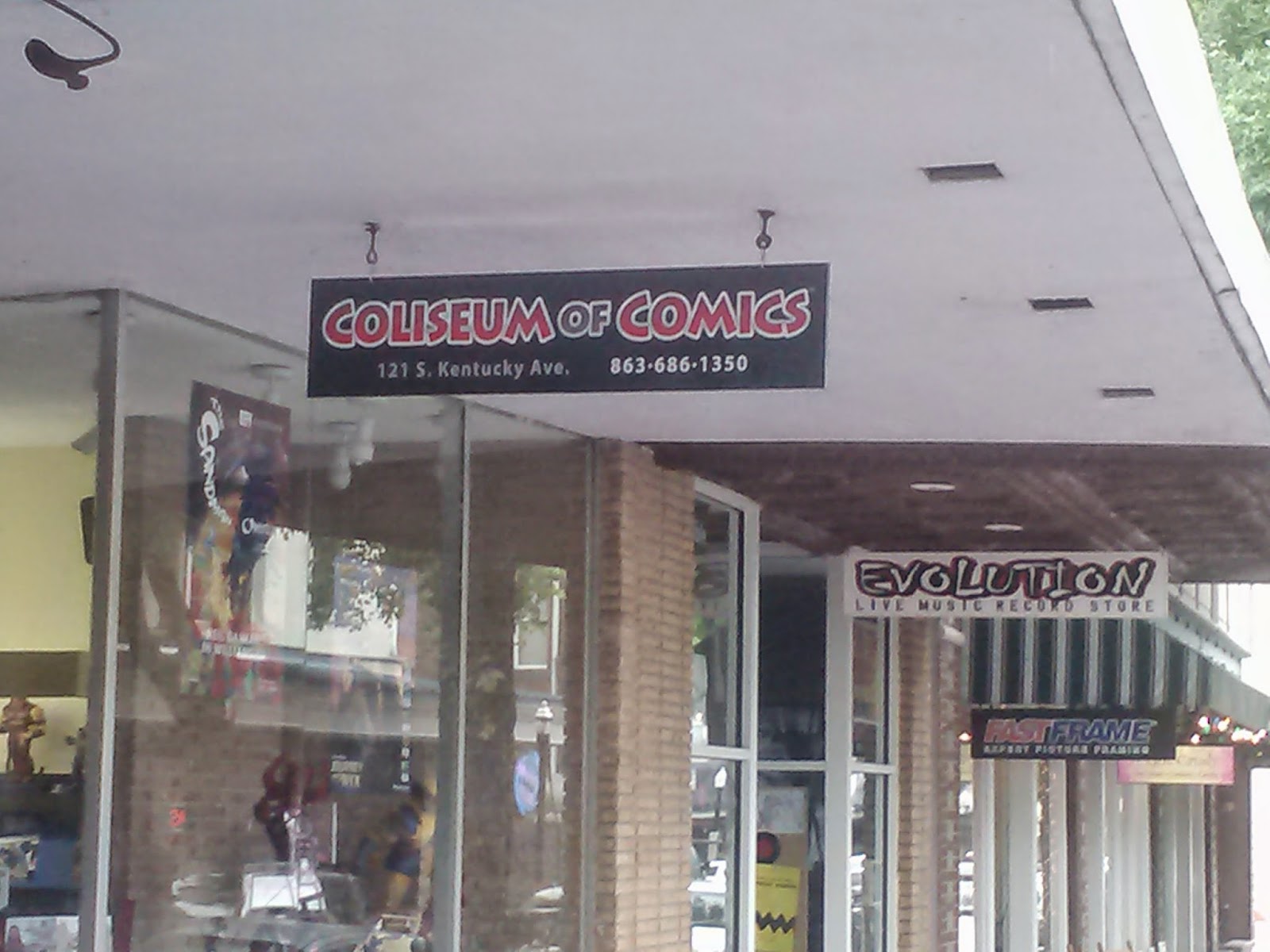 First stop was the Coliseum of Comics store in downtown Lakeland.  Reasonably packed, with their gaming room in the back set up for their display of free comics and guest artists. 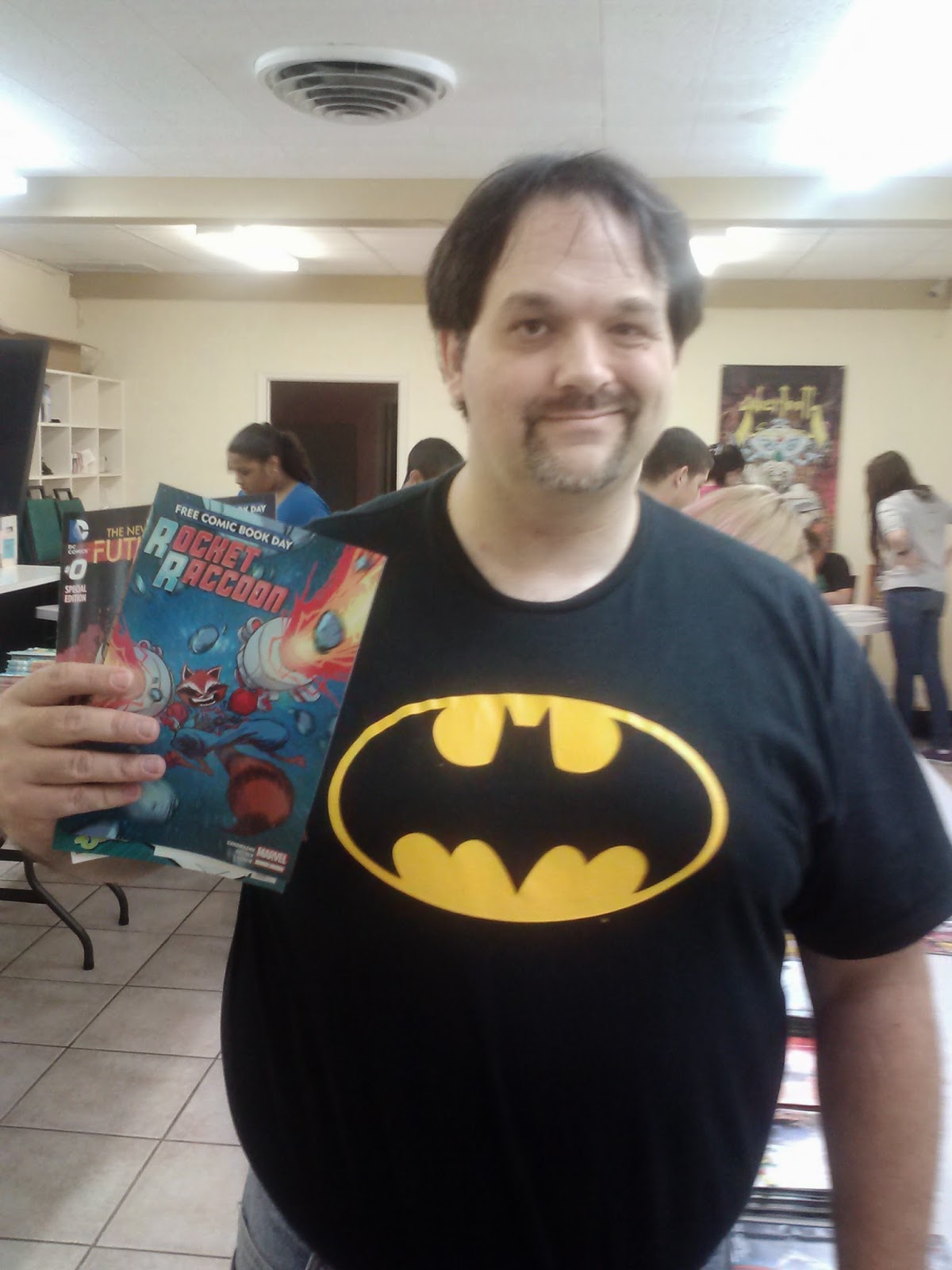 With thanks to the staffer who took this picture of me, holding up my grab of free titles.  I snagged Rocket Raccoon considering the Guardians of the Galaxy movie coming out this year...

While here I also realized Gaiman came out with a new Sandman title and thankfully they had one last copy of the first issue on hand. Whew. Now just gotta remember to get him to sign it if I ever run into him...

Next stop: Heroes Haven all the way over in Tampa (Carrollwood area). 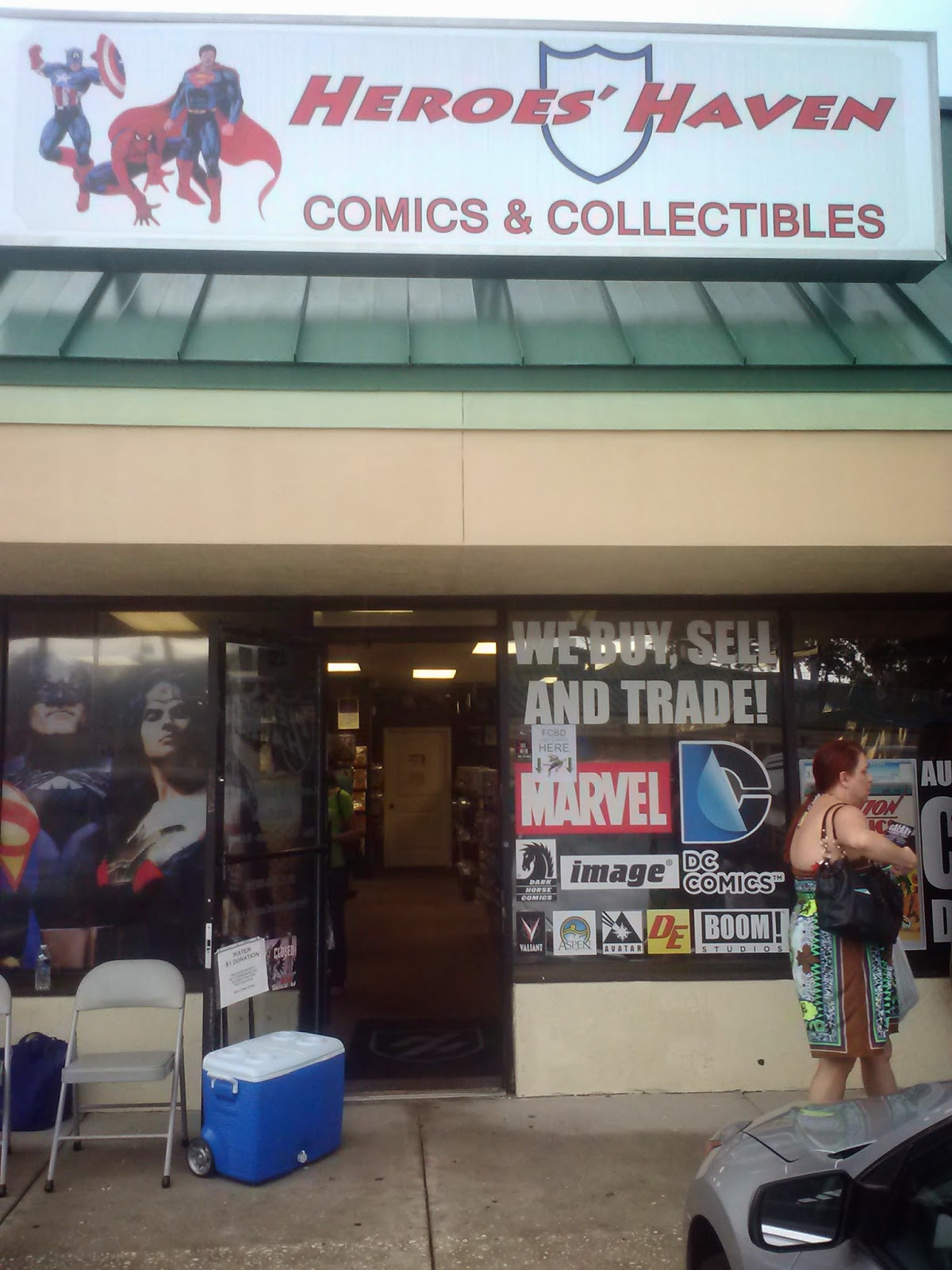 I went by their event last year, and it was packed then and this one was packed as well...  I was told at the door they had 100 people in line at the 8 AM opening... and this was in rainy weather...! 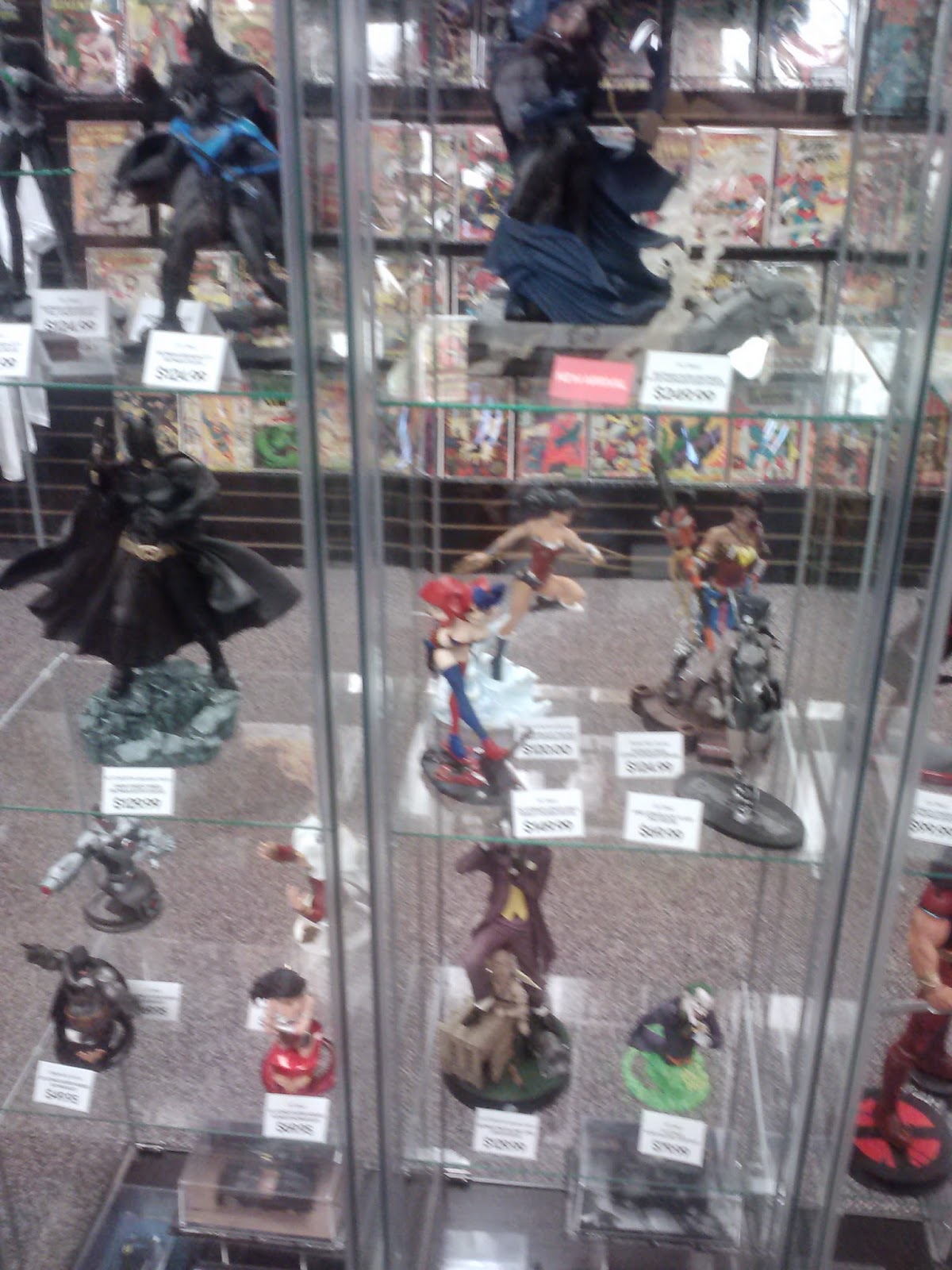 Just taking pictures of DC Comics figurines.  If I had the shelf spaces handy, I'd be tempted to buy one... 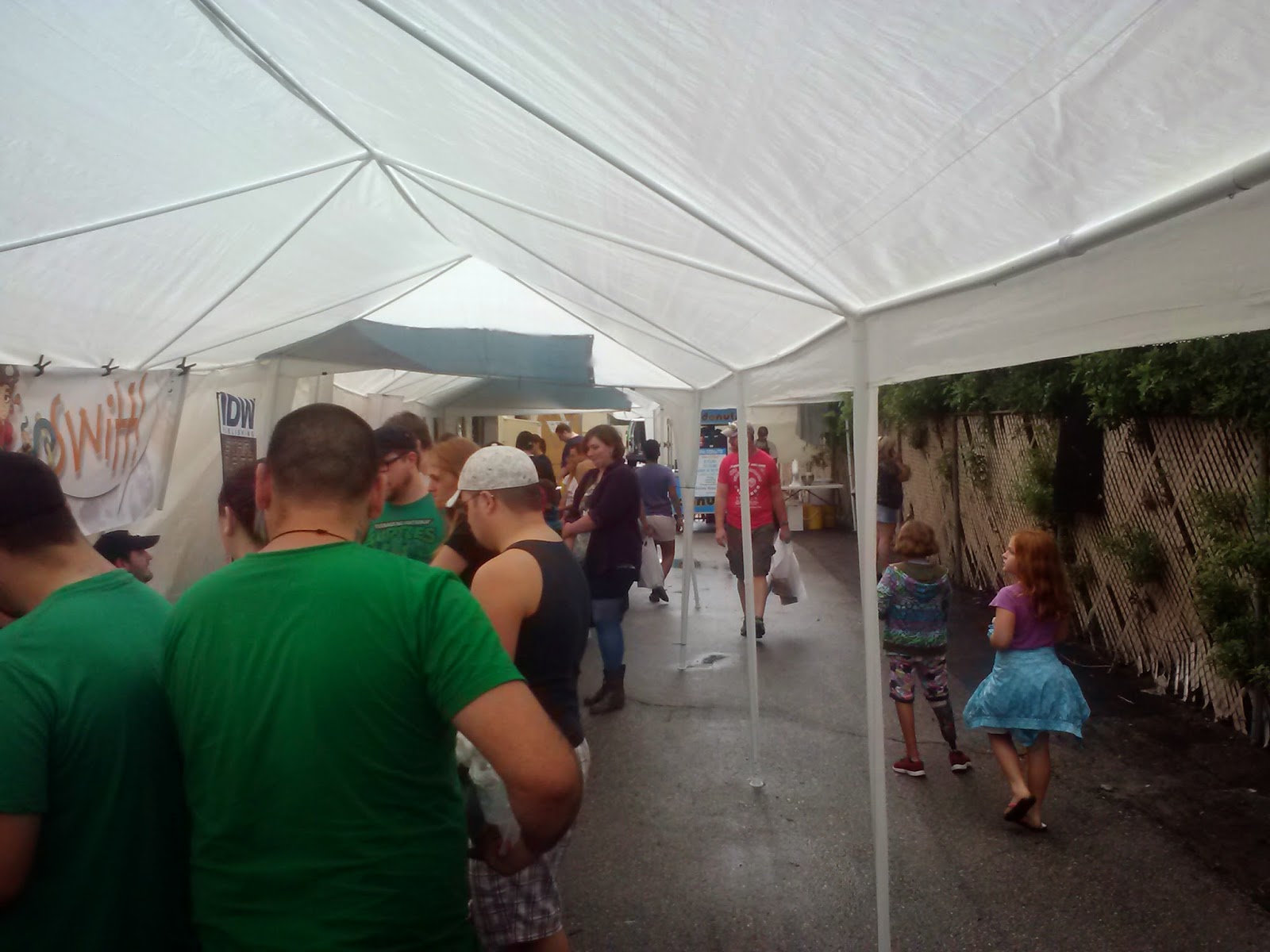 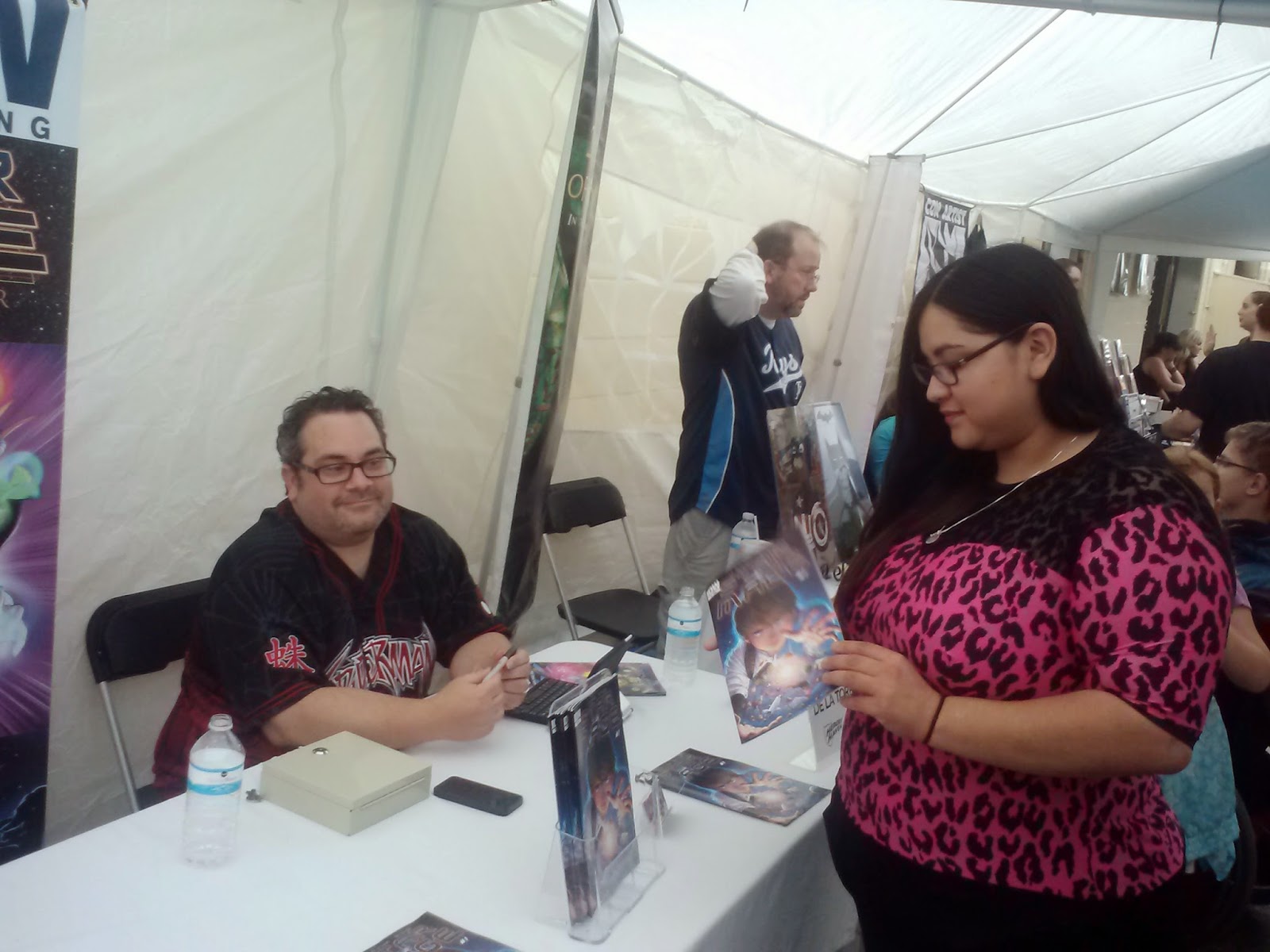 And this is a guy I know from BucsNation!  JC De La Torre is a regular commentator on the threads there, but he's also a published author and got his way in with a decent publisher IDW to start a new series Star Mage.  I asked him to sign a #1 copy with a #FireSchiano tag for old times' sake.  Heheheheh... 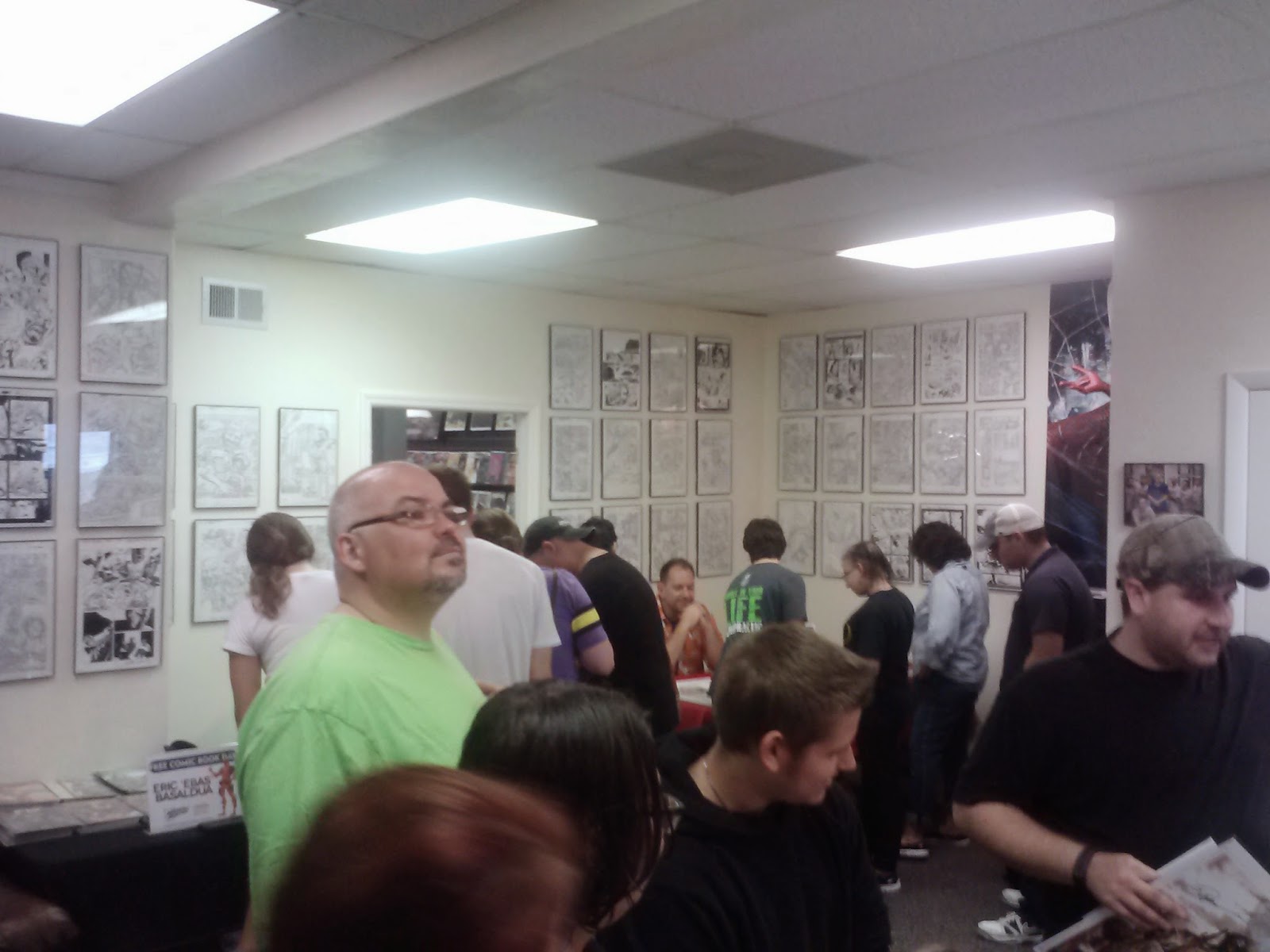 It turns out they ran out of the free comics titles an hour or so before I got there, but that was okay.  I was there mostly for the ambiance (kinda like going to a comic-con, only less walking involved).  As I headed out I got one more shot in to give you an idea how packed it was at Haven.  That's artist Bart Sears in the background.

So, how's your (rainy) weekend going?
Posted by Paul W at 7:30 AM No comments: Links to this post