It's our 120th Birthday here at Bartow! 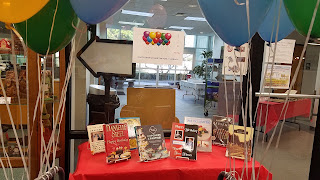 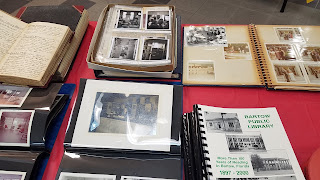 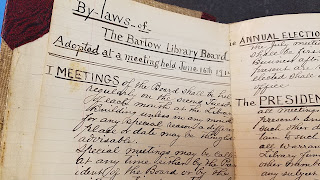 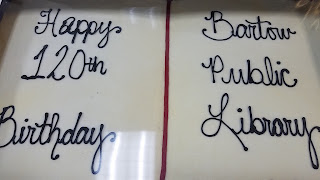 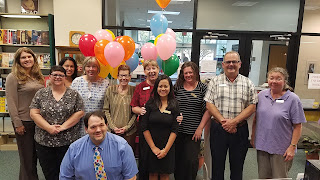 Thank you all for your patronage of the library!
Posted by Paul W at 11:11 AM No comments:

With thanks to the Tampa Bay Library Consortium, our library has a promotional video out!

But today I find out that one of my favorite graphic illustrators died. Berni Wrightson, co-creator on DC Comic's Swamp Thing and arguably the most influential Gothic Horror visionaries of our era, passed away...


He was also one of the more recognizable Batman illustrators out there. He infamously drew Batman's cape to be longer than his own height.

Wrightson also worked on a project - on his own time and dime - illustrating Shelley's Frankenstein back in the 1980s, his most famous work and considered one of the best adaptations of that classic work ever.

But I will always remember Wrightson as the one who teamed with Len Wein to create Swamp Thing, one of the best-loved comic books from the early 1970s

I was seven, maybe eight years old, when my family was part of a comic book trade-off at the Dunedin Public Library. We ended up with a copy of the Special Issue re-release of issues 1 and 2 of the original Swamp Thing. It was an eye-opening work, far darker and mature than most of the children's literature I had been reading at the time: In hindsight, the story itself was pretty simple origin story stuff: good scientist gets killed by mobsters trying to steal his plant formula, the plant formula turns scientist into a monstrous plant-human, the Swamp Thing gets his revenge but not before his wife is also killed, and a vengeful government agent swears to hunt the Swamp Thing down for all the wrong reasons.

But the artwork was incredible, with the beautiful use of shadow, and stylistic camera angles: 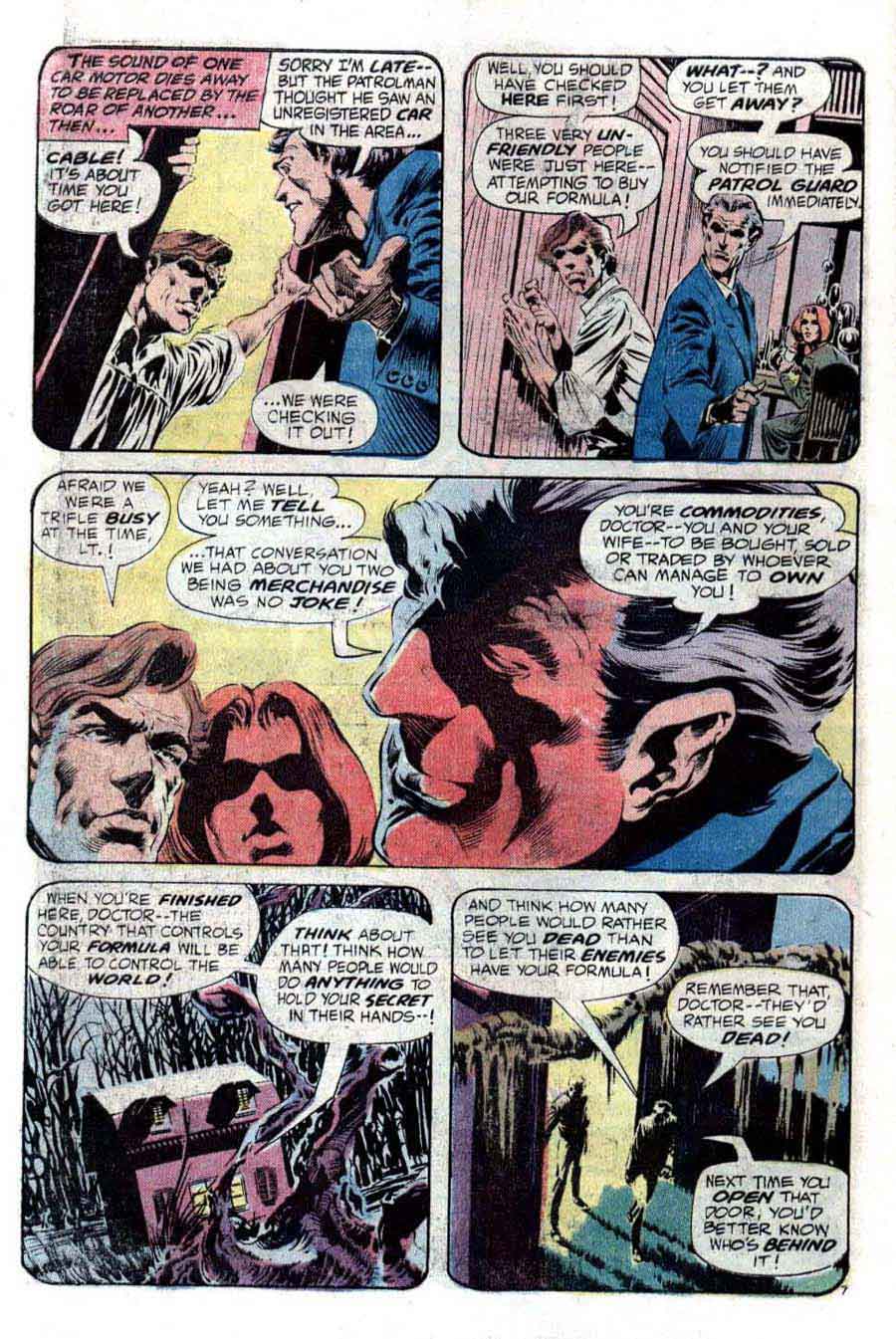 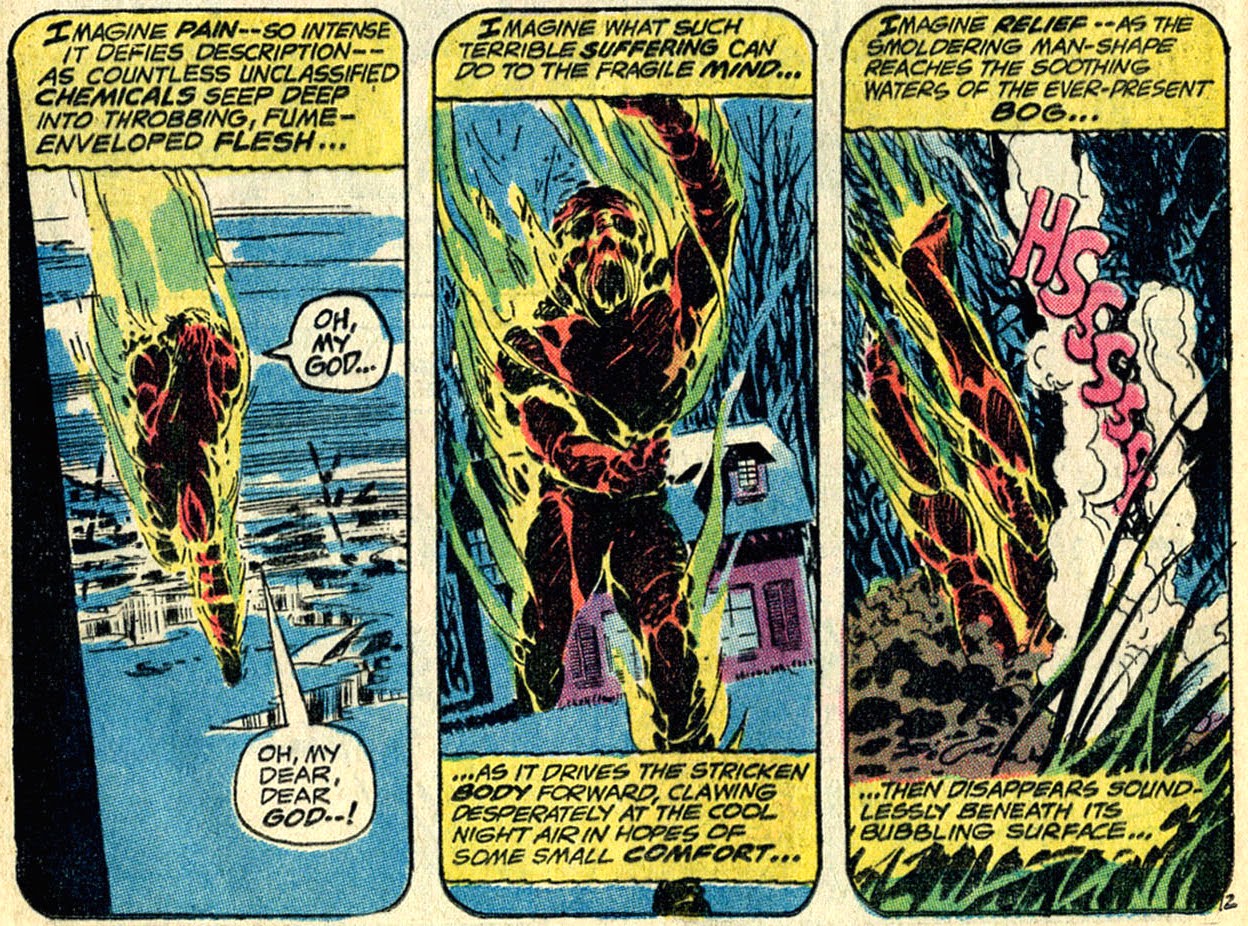 This was one of two comic book in the house (the other was a beat-up copy of a Star Wars #14 I think with Han and team battling space pirates) until the 1980s when I snagged Issue 3 of Dark Knight Returns and got hooked for good.

When I was that age, I dabbled a bit into drawing, to see if I could develop a talent for it. Never really could. I got into writing instead, and I hopefully have some talent to that.

One of the things I want to do as a writer is become a comic book writer, to work in that genre of storytelling. I had hopes of someday getting into the industry, and getting to team up with the aritsts I liked.

"He was soon borne away by the waves, and lost in darkness and distance."
- Final line of Frankenstein
Posted by Paul W at 2:38 PM No comments:

The Value of Librarianship in 2017

Normally, I'd be posting this over in my political blog. This is getting posted here because it involves my library profession.

There's been a lot of worried emails in my Inbox from fellow librarians about this.

The recently released annual budget from trump's White House is one of drastic cuts to nearly every aspect of the federal budget (except for the Defense). In particular, he's calling for outright elimination of funds for 19 agencies.

One of which is the Institute for Museum and Library Services.

Its ongoing mission is to explore new worlds and seek out new civilizations to "inspire libraries and museums to advance innovation, lifelong learning, and cultural and civic engagement. We provide leadership through research, policy development, and grant making."

It's not as high profile as the Corporation for Public Broadcasting AKA PBS, the home of Mister Rogers, Big Bird, Masterpiece Theater and Antiques Roadshow. And it's not an immediate threat to most libraries: your public libraries get most of our funding from city, county, and state taxes/revenues. But this potential shutdown hits us hard: A lot of grants towards library projects are at stake.

Eliminating this grant provider could force many small county and city museums to close their doors. Places of historic, artistic and scientific value no longer available to the public. Special collections at libraries - also historic, artistic and scientific - no longer available as well. Things that require preservation can fade away, lost forever.

These cuts would be a disaster: not JUST for museums and libraries but for the nation.

“The President’s proposal to eliminate the Institute of Museum and Library Services in his FY2018 budget just released, and with it effectively all federal funding for libraries of all kinds, is counterproductive and short-sighted. The American Library Association will mobilize its members, congressional library champions, and the millions upon millions of people we serve in every zip code to keep those ill-advised proposed cuts from becoming a congressional reality. Libraries leverage the tiny amount of federal funds they receive through their states into an incredible range of services for virtually all Americans everywhere to produce what could well be the highest economic and social ‘ROI’ in the entire federal budget.

“America’s more than 120,000 public, school, college and university, and many other libraries aren’t piles of archived books. They’re trusted centers for technology, job counseling, retraining, veterans services, entrepreneurship, education, teaching and learning, and free inquiry at the core of communities in every state in the country—and in every congressional district. And they’re staffed by the original search engines: skilled and engaged librarians.”


I know personally how well-liked and well-used libraries are: Nearly every time I've seen - especially first-hand in Broward County back in the 1990s - a funding matter come up for library support, a vast majority of residents vote in FAVOR OF better funding, improving services, building MORE branches to serve the public.

This proposed budget goes against everything I've seen out of my fellow Americans when it comes to libraries (and museums). WE know the value of this shared community resource. WE need to fight back and call Congress to tell them to save the IMLS, and to save our communities by protecting EVERY public service - my God, they're slashing MEALS ON WHEELS? - trump threatens today.

Well, I did break that damned Writer's Block and got a story finished and submitted last night to a dark fantasy horror publication called Nightmare...

And the rejection letter came back this morning.

I actually feel more relief than despair. It used to be these rejections would take MONTHS. Thanks to advancements in technology, I can find out that my stories do not have enough sea monster in them.

I know, I know. Writing and submitting is 99 percent rejection. Just have to find the right story told the right way to the right audience...
Posted by Paul at 9:51 AM No comments:

To the City of My Birth, I Will Go

Comic cons are getting to be nationwide, even the small cities away from the urban centers like Orlando and Tampa are hosting their own.

Bartow, as you know, has one called SyFy (I need to upload photos of the one we just had).

I was born there, ages ago, in the forgotten days of yore.

They're hosting their next one in August.

I should go. I haven't been to the hometown since 1974 when my family moved to Virginia Beach. It's right up the road on US 19, there's been several chances I could have gone.

I've got books I can sell, as an author. I have a story in Strangely Funny III, "Minette Dances With the Golem of Albany," that has specific ties to the city.

Now I've got a great reason to do so.

Update 3/14/17: Okay, I am signed up. Now it's a question of finding out which hotels the guest artists are staying at if they've got one lined up.
Posted by Paul at 10:32 AM No comments:

On a professional note, Bartow Public Library is celebrating its' 120th Anniversary this month! We're going to host all-day events on March 29th complete with cake and activities. To the eight regular readers of this blog, please plan out a trip to our fair library and join in on the fun.

On a personal note, I really need to get back to writing my stories out. I am coping with the wrong levels of anxiety and stress and depression. /headdesk

On a cat note, Mal has learned how to jump up when I toss snacks at him to snag the bite-sized bits with his mouth. A few more weeks and we can go on Saturday Night Live to show off.

KEEP READING!
Posted by Paul W at 8:52 PM No comments: