Defend Your Libraries in 2022

Well, this is unsettling (Via Nikoel Hytrek at the Iowa Starting Line).

The effort to ban books has expanded beyond the classroom now to public libraries, with a new GOP-backed bill adding librarians to their target for prosecution and civil fines of those they believe give access to materials that are “obscene or harmful to minors.”

A collection of 14 Iowa Republican representatives introduced a bill Tuesday that makes it illegal for a person affiliated with a public school or public library to knowingly spread “material the person knows or reasonably should know, is obscene or harmful to minors.” Colleges and universities are exempted.

The penalty would be an aggravated misdemeanor, upgraded to a class D felony if the person was previously guilty of this.

In short, Iowa Republicans want to turn librarianship into a criminal profession. Putting us up there with robbers, drug dealers, and people who talk at the theater.

You want to know how this game will get played if Iowa makes this a law?

Say a mature-looking young adult comes in, claiming they're a college student, asking for a book on sexual identity from the 306 Dewey Decimal (DDC) shelves. As a librarian, I would direct them to the shelf area, show them the titles we've got there. And then WHAMMO the "college student" turns out to be a 17-year-old high schooler on "dual enrollment" with the local community college and they call in the cops to arrest you for "knowingly spreading obscene material" to a minor.

You think that if this law passes, the courts will only rely on the fines to punish librarians, I mean who wants to send a sad little librarian to jail over an obscene book? Thing is you WILL get judges who will punish sad little librarians "to send a message," because those judges may agree with the Far Right religious conservatives who want to ban "obscene" books from the face of the Earth. Even then, those fines aren't cheap: A full-time librarian usually makes between $35,000 to $45,000 a year. Even a $625 fine is cutting into rent or mortgage, not to mention the costs of fighting these charges in court. Want to take care of $1000 fines every month? There goes most of a monthly paycheck for librarians. This would bankrupt most of us.

Oho, you say. If this law passes, perhaps it would be safer to pull all the obscene books off the shelves, right?

You want to know what these Far Right religious extremists think is obscene? Anything about gay and lesbian and trans culture, even when those books aren't graphic in detail. Young Adult books about sexual identity that don't even get as far as kissing scenes will still get targeted.

Anything about sexuality in general, even straight-up medical textbooks detailing human anatomy, and sociology/psychology textbooks. Because even those research-type books will offend those wingnuts.

Anything about "Critical Race Theory" because God forbid we upset Far Right people who believe that pointing out systemic racism is obscene to them.

Anything artistic from the Fine Arts (700s DDC) shelf range that just happens to show human nudity (Note: Most public libraries already self-sensor themselves from anything sexually graphic. But the religious nuts will go after anything that even hints at sexuality).

And it won't be the cheap and tawdry books these wingnuts will go after. Prize-winning authors like Toni Morrison and Ernest Hemingway - about a hundred writers and about a thousand literary works that make up a public library's core collection - will get labeled "obscene" and make it impossible for us to keep our doors open to everybody else who wants to use the library for their reading (and entertainment) needs.

And this is just the books: Many libraries have DVD movies available - yes, not everybody's gone to streaming yet - and half of those movies will be "obscene" in the wingnuts' eyes.

A good library - school, public, college - is one with a broad range of books from fiction to nonfiction, able to provide research and literary information to the communities we serve. This means we have to cover - even with a handful of titles - a lot of topics and reading interests for a diverse population, some of whom DO WANT to read books that others might find grotesque.

Again, most libraries DO evaluate and self-censor when necessary: For example, most libraries will not stock The Illustrated Joy of Sex because we know community standards won't abide it (Also, it will disappear off the shelf). We also won't stock The Turner Diaries, not only because it's openly racist and Anti-Semitic but it also contains bomb-making instructions violating laws banning such information (also also, that book is poorly plotted with one-dimensional characters, bland sex, and suffers many grammatic errors).

But what this Iowa law will do is make librarians vulnerable to ANY accusation about ANY other book that most would find benign but what the extremists will view as dangerous. Librarians could weed out every "offensive" book we could think of, and the wingnuts will STILL find something on the shelf to offend them and punish us.

And this just won't stop in Iowa. If this law passes, and it survives every court challenge - even the Supreme Court where a 6-3 conservative lineup could well side with the religious extremists - every other Republican-controlled state is going to pass their own version. Half the nation could well see our public libraries shut down due to the threat of prison and bankruptcy facing their staffers.

And who would win then? Without public libraries, children and adult literacy withers. Public access to computers goes away, hurting poor people searching online for jobs or families trying to file for food stamps. No more children's programs. No more community centers.

Libraries matter to people. Libraries define a city, support their counties. We're a public service that people enjoy having, because they often get good results from what we help them with. You can hear people whine about the post office or waiting forever at the DMV, but you don't see those kind of complaints about libraries.

Except from the ones who hate libraries for doing the one thing the religious extremists despise. We give our communities the diversity of experience that shames those who would rather keep us ignorant, uninformed, and fearful.

Well, to hell with those haters.

You're gonna have to pry my library catalog from my cold dead hands, you bloody wingnuts. 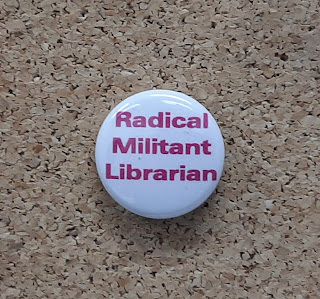 I sent in five articles from my political blog for the Short Non-Fiction/Blogging category, hopefully this year I won't be toooooo partisan in my opinions.

I also submitted two flash fiction items I'd written this 2021, both of them were for a flash publication that were not accepted, but I feel good about them so I'm trying them with the RPLA. Update: Okay it turns out I did not pay attention to the rule changes. Last time I was told you could submit up to five entries per genre, but this year it's just five entries TOTAL. So I had to weed out the two flash fiction entries and eat the "No Refunds" consequences.

I also also submitted the FWA's annual anthology, this year themed "Thrills and Chills," and with luck it's funny enough - well, *I* like the punchline - to impress the judges this time around.

I'm thinking about submitting one more, longer short story that I've been toiling with for years, but I need to get it done soonest before the Early Bird submission costs go up.