If you'll recall last July I reported the anthology History and Mystery Oh My was up for a state-wide award with the Florida Authors and Publishers Association. I found out from the editor Sarah Glenn today that, yes, the book won silver with the President's Award for Short Story Form.

So today when I met with Sarah and her partner in crime Gwen Mayo to gather autographs - copies of some of the Mystery and Horror LLC publications are being donated to the Florida Library Association for 2016 Annual Conference this March - they brought along a medallion award for me to pose with. 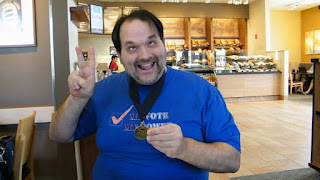 If my mom ever sees this, I'm a dead man.

Trying to make a face like that while posing for a picture is harder than it looks...

In other awards news for this same anthology: The Agathas - a big-time "cozy mystery" literary award - nominated TWO shorts for 2015: “A Questionable Death” by Edith Maxwell, and “Suffer the Poor” by Harriette Sackler.

Congratulations to Edith and Harriette! The awards are given out this April, so we'll see how it goes.

Just noting that the format for getting FREE ebooks for B&N Nook readers has changed.

It now goes to B&N Readouts, which is an app-friendly format.

As a result, people aren't able to add comments - at least, not clearly - that provide additional FREE downloadable books on the market each weekend.

There's a regular poster who does - Penelope - and she's decided to move her FREE weekend listings to her own blog at turningkey.blogspot.com where links back to the bn.com site are available.

If anyone is trying to find Stories For All Seasons on Amazon right now, I need to let you know that version of the anthology has been pulled.

The local writers' group Writers 4 All Seasons is currently revamping our attempts to publish annual anthology works, and our board has decided to redo Stories in another format that will allow for PRINT versions as well as eBook versions for sale. I've been told that the print and ebook revision will go live soon, hopefully before June, and when that happens I'll make note of it here.

We're also discussing how we need to do more on marketing, which is a key component of self-publishing. Just throwing an ebook out there without push or promotional materials doesn't help. Even I try to market my works - hi there, buy my books! - using online blurbs and printed bookmarks and posters.

As for the next anthology - a planned effort to create a shared universe with overlapping characters and events - that's been put on hold until we finish this revamp and complete some effective marketing steps. We'll see.
Posted by Paul W at 4:44 PM No comments:

Long Trip Back to Gainesville and to My Alma Mater

On a whim I decided to travel back to Gainesville and see the place where I spent my college years, as well as three years working at Smathers Library West.

There was a local comic-con, a campus-run SwampCon that's mostly geared towards the anime/manga student fanbase, and had a few events going on during the weekend that were of interest. We're going to host our own comic-con at Bartow next Saturday on the 20th so I wanted to see another example of one before the SyFy one...


While there, I walked across campus - I miss having a bike with me today, it was clear blue sky weather and it could have been fun - and made my way to Library West...

When I worked there from 2004 to 2006, the university remodeled Library West by expanded the first three floors, added collapsible shelves to increase collection space, and updated nearly every corner of the building to be a computer lab for student work.

On Saturdays, there's nobody from my Reference Department in, mostly because the demand for research help isn't as high that day. In fact, sad to note that Reference research has dropped well enough that the Reference Desk itself no longer exists on the Third Floor. I was stunned to find it gone. It could well be that the staff roves the floor instead - one of the trends in academic librarianship is portable/remote assistance - but the loss of a standard reference desk just upends my entire experience as a Reference Librarian these twenty-plus years.

Just to note, the pictures I took walking there and back across campus:


The campus is pretty calm on the non-football season weekend, it's more packed on a school day with 50,000-plus people milling about.

At least copies of my book Last of the Grapefruit Wars are still on the shelf, but nobody's checked them out since 2006. Can I get a couple of students to help an alum out boost his circ stats?!

Hide and Seek: the FWA Collection

As mentioned before, the Florida Writers Association is hosting an annual anthology publication and is now taking submissions for it.

Rules for it linked (PDF) here.

The theme of it is Hide and Seek, so the submission has to be some element of hiding (secrets, person, MacGuffin) and seeking (quests, self-reflection, stern chase).

Deadline is April 30th, but it helps to get it in as soon as possible.

No entry fee, but you're capped to two stories to submit. Word count is at 1,200 words (if you write about 160 words per page double-spaced using Times New Roman at 12 pt, that's seven pages).

Failure to submit properly results in your immediate deresolution.

Writers 4 All Seasons: The Blog

My local Lakeland writers' group - Writers 4 All Seasons - had a broken website that no one could access anymore, so one of our members took it up to create a new one on Wordpress.

Writers 4 All Seasons is up and running now.

It's currently promoting our Kindle-only Anthology Stories for All Seasons and I heartily encourage all seven followers of my blog to download about 50,000 copies... well okay, in practice you can only purchase it once, but I'm counting on ya to tell 50,000 friends please and thank you... ;)
Posted by Paul W at 8:09 PM No comments: