For the summer movie season, that is.

I am a geek and this IS a geek-oriented blog.  So Relax.

I gotta plan ahead now because 1) I'm back to being hours away from my circle of friends for movie-going, 2) I want to see a couple of movies with my nephews, especially since we shared an experience with watching Star Trek back in 2009 (has it been that long already?).

May - Iron Man 3 on May 3rd.  Trailers look very good.  The quality of actors and personnel behind the camera are good.

Star Trek Into Darkness on May 17th.  This one I want to see with my nephews, to follow up from 2009.  But I also want to bring my friends along as well, especially so I can introduce Tommy to Tommy (long story).

June - Man of Steel on June 14th.  The weekend most likely, as well it's mom's birthday and all.  I'm not entirely sure that casting Amy Adams as Lois Lane was a good idea.

Monsters U. on June 21st.  To my mind, this was an unnecessary prequel to a well-loved movie that worked well as a stand-alone.  I usually trust Pixar, but this one... I might could wait for the DVD...

July - I'm hesitant to go with The Lone Ranger movie, mostly because I'm questioning the idea of casting Johnny Depp - I know he's a good actor and all - as Tonto like it was some kind of artistic move.  So for July 5th I'm probably going with Despicable Me 2: I found the first one delightfully wicked.

I'm surprised about seeing The Wolverine - with a bankable character and bankable actor in Hugh Jackman - sitting so late in the summer blockbuster line-up at July 26th.  Especially since the plot - Wolverine in JAPAN! - harks from one of the more popular story arcs from the 1980s.

August - sadly one of the weaker months even though it's usually wide-open: I guess I don't understand how family summer vacations from schooling works (since most kids won't be heading back to class until near about Labor Day).  August 16th seems to be it for the summer with Kick-Ass 2 - I liked the first one - although I've heard (not read) that the graphic series sequel was pretty nasty.

Why This Movie Didn't Win Best Picture I Will Never Understand

Ladies and gentlemen, It's St. Patrick's Day.  Time to break out the green ties, the Irish jokes, and the Quiet Man DVD:

The YouTube clip provided is the epic donnybrook that climaxes the movie.  Legend has it the producing company Republic Pictures insisted on the movie having a 90-minute cut no excuses.  John Ford couldn't figure out how to cut anything else out of the story - that's how good the movie was turning out - so what he did was preview an uncut film to the studio heads.  Right at the 90-minute mark - somewhere within the first three punches thrown in the fight between Danaher and The Yank - the film ends.  "What the hell?" the studio heads cry out.  "Well, you wanted it 90 minutes long no matter what," Ford answered.  The studio heads dropped their insistence on it being 90 minutes long.

Which was a smart move by those studio heads.  Republic, which tended to work on low-budget thrillers and Westerns, received their only Best Picture nomination in studio history with The Quiet Man.

Still planning to make a visit to Cong, County Mayo, Ireland some day...
Posted by Paul W at 10:32 AM No comments:

Not Really Off-Topic Over Here: Things I Learned at MegaCon 2013


this will be cross-posted to my political blog

With the goodness that is having a full-time job, I was able to afford another trip to the Orlando convention center for yet another MegaCon. 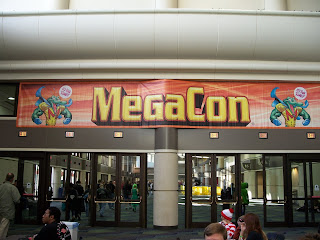 Things to note:
I'm pretty sure I noted this last time on my other blog.  There's a big early crowd showing up (by 8 AM) waiting for the main floor to open (10 AM).  There's a big open area where they had us lining up for the 10 AM opening.  They could have easily hired one of the cosplay groups - the 501st Legion, the GhostBusters, someone - to perform a couple routines on the floor while we wait. 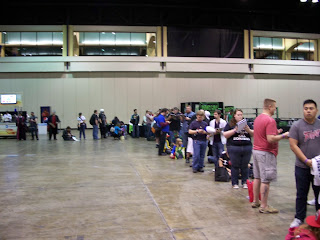 You should never really go by yourself.  While going solo frees you up to go in any direction you want and figure out what discussions to attend or not, you do end up feeling a little left out and without anyone to share jokes and running commentary about all the costumes. 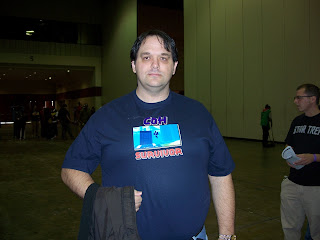 It's also hard to ask total strangers to take photos of you, especially when there's a very cute Wonder Woman cosplayer who did a very good job on the outfit, most of them are just half-heartedly sewn together but damn... anyway never had a chance to pose with her, if I had a wingman with me he/she/other gender could have taken the shot... 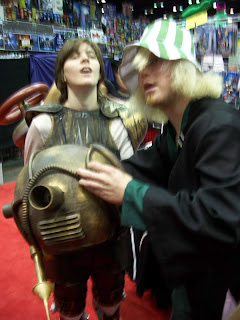 AND always have someone on hand to help you with your costume.  Even the most durable helmet from a anti-libertarian video game requires a little duct tape.  Especially on a busy day like Saturday. 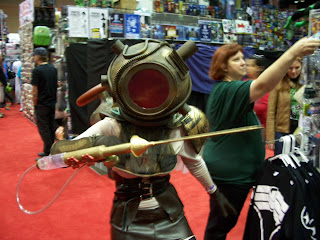 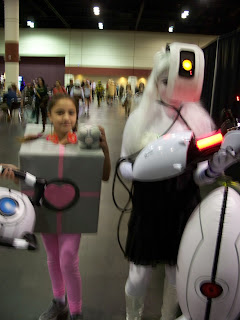 If you ever go to a comic-book / scifi / anime convention and decide to dress up yourself for Costume Day, don't be surprised if you get everyone and I mean EVERYONE asking you to stand and pose.  I accosted those two kids who came dressed as GLaDoS and Companion Cube to get a picture for this blog entry, and before they and I knew it a large crowd of other picture-takers surrounded us and kept them posing for minutes.  I spotted them later near the Signing area trying to stay out of the rush of traffic and GLaDoS told me they kept getting asked to pose over and over wherever they walked on the floor... and she was getting tired of gripping the Portal gun.  So if you plan on wearing an awesome costume... energy drinks.  And comfortable shoes. 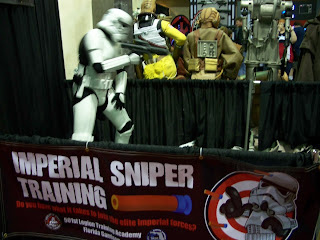 That Stormtrooper was with the 501st.  He was working the target practice game area - yes, go ahead and snicker - and had just gotten hit in the inner thigh with a nerf bullet.  (No, not that kind of nerf) 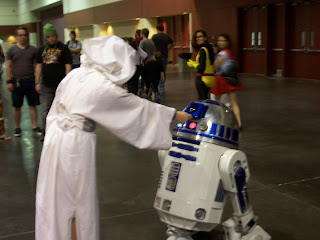 There was another R2 unit working the floor again.  Those R2 droids are incredible, and everyone stops to pose and take pictures of them.  There's a group that build them, and I joked at the Jedi working the gateway there that if they unleashed all those R2-D2s onto the convention floor they would conquer all. 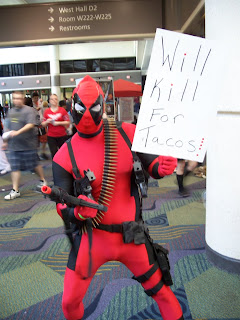 Ah, Deadpool.  My old nemesis.  How far you've fallen.  Tacos.  I ask you, why not the combo platter and get the burrito and enchilada as well? 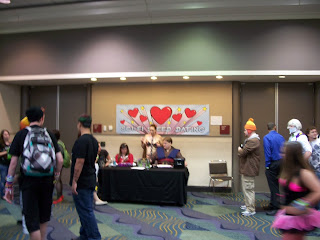 Note that I mentioned earlier about going solo to the con.  I noticed they were offering a Speed Dating event in the afternoon, so I circled over to where they were hosting the event (over in a small corner of the convention hall, by the by.  What I found was a lopsided turnout. 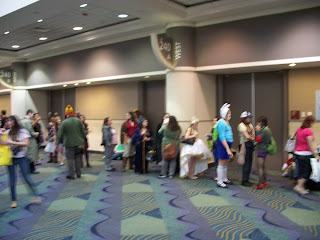 There were about 15-20 women lined up for the event.  You can see it was kinda sparse. 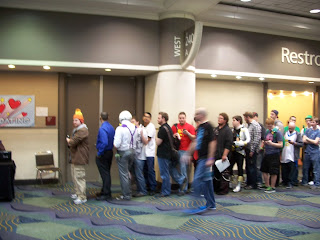 And there were about 30-40 men lining up.  Not an honest balance of turnout.  Dear organizers: you might wanna have an online booking to see about what the turnout will be like, so you can go a little out of the way to get about 20-30 more women interested in showing up to date guys dressing up like Jayne and Riddler and... and... well there WAS a Hugh Jackman lookalike as Wolverine, ladies.

Not pictured: the huge swarming crowds.  Foot traffic again was difficult as people would either bunch around a table or vendor pavilion or else stop right in the middle of the floor when they bump into some friends.

Also not pictured: the awesome Artist Alley area where the struggling self-employed comic artists and craftspersons showed off their work and sold stuff.  Sadly, one of the artists I like to see at the MegaCon was unable to attend: Jennie Breeden's budget keeps her limited to the number of conventions she attends, and she made the decision to skip this year in order to attend some of the West Coast ones like in Seattle.  Well, that just means I had to waste my convention money buying prints from Jen Broomall, okay?  You see, I don't need... sniff... I don't to be slavishly devoted to one artist to... to... wait, what do you mean Jen doesn't have any Wonder Woman artwork?  /sulk  Well, okay, Peter V Nguyen has something with Wonder Woman in it...

Also also not pictured: the official Special Guest Artists area had its ebb and flow and well and I found myself in front of Amanda Conner's booth.  Basically the artist that showed women can draw the Good Girl stuff just like Adam Hughes can, and with a bit more taste and whimsy in the artwork.  I purchased a print she did of Catwoman but while I did she tried signing the MegaCon media guide I had innocently placed on the table while digging out my wallet.  She'd just been signing anything in front of her, poor thing.  I suggested she didn't need to autograph that, just the Catwoman print, so she did and I congratulated her on the great work she did on Power Girl and she said she had fun doing it.

Also also ALSO not pictured: Patrick Stewart and most of the regulars from Star Trek: Next Generation.  One, that would have cost me money: Two, there was no way to see Patrick Stewart at all considering the long line waiting to see him in the celebrity Signing Area.  The line for him circled the room.

Any other observations?  Oh yeah.  The shuttle bus service from parking lots to convention hall is helpful (parking is on one side of the convention grounds, away from the West Concourse that they always use), but it gets stuck easy in daytime traffic (the convention center is on a major city road).  Building an elevated transit car system - call Disney they can hook you up with something - would ease the regular traffic and make it easier for people to get to and from convention halls and parking lots.

Now, BACK TO WORK ON MY STORY-WRITING!
Posted by Paul W at 5:56 PM No comments:

One of the Side-Effects Of Being Gainfully Employed

Is the serious urge to get back to writing fiction.

The depressive funk for four years has lifted.  I am tackling a half-finished novel from an early NaNo yet again in a mad desire to get something e-published before April.