Official Invitation to Wesley Chapel Barnes & Noble on May 21st

I have been formally invited to attend this year's Local Authors event at the Wesley Chapel Barnes & Noble bookstore on Saturday May 21st.

It will be in the afternoon from 2pm to 4pm, and most likely on the Second Floor as always.

This year, I will have a few more ebooks to promote as well as the third volume of the Strangely Funny series.

I really would like to see my friends in the Tampa Bay area show up for moral support.

There will be more details to follow.
Posted by Paul W at 8:21 PM No comments:

Happy Easter and Some Writing Announcements

Just saying, this Easter Sunday, that I want to announce a few things.

1) Mystery And Horror LLC publishing has accepted another humorous short from me for their upcoming Strangely Funny III, their popular ongoing humor/horror anthology series. Still waiting on word for when the release date will be - hopefully soon in April - but meanwhile here's the cover for the upcoming print:

2) I've been invited back to the Barnes & Noble Local Authors Event in Wesley Chapel, FL this year. This event will be on Saturday afternoon during May 21st from 2:00 to 4:00 PM. There hasn't been final confirmation and paperwork yet, but I should get something soon.

3) Finishing up a pair of stories for the FWA. The story I hoped to submit to the "Hide and Seek" anthology - a science fiction idea I've had for a decade called "Problem Solver" that needed to be finished - is turning out too long. It's twice the length of the word count, so there's no way I can whittle it down. So I've started a second story about finding the Book With the Blue Cover in the Library Infinite (What's the classical Greek for "Infinite"? Same word, just pronounced a bit different?) which I have to keep below 1500 words.
Posted by Paul W at 1:58 PM 1 comment:

The Quiet Man: The 2016 Remembrance

Finds a travelogue of the town of Innisfree.

Also finds a blog reporting how there are difficulties surrounding efforts to rebuild White O'Morn, which had fallen to ruin. The article is a few years old, but anything more recent doesn't seem as reliable. Ach.

One of these days, I gotta go visit. I need to be able to afford the trip, though. :/

Another Caturday in March 2016

Well, I couldn't stay away on this topic, and I also needed to mention my kittehs' current status.

As it were, their claws needed clipping: I can't do it by myself, neither Ocean nor Mal will sit for me long enough, and I can't train them to accept it. They never equate the snacks I try to bribe them with towards good behavior on their part.

Also, Ocean had been getting mottled (?) matted (!) hair along her back for the past year since her vet's visit, and she needed a bath and grooming.

Unfortunately, it was so bad that the cat beautician had to shave. 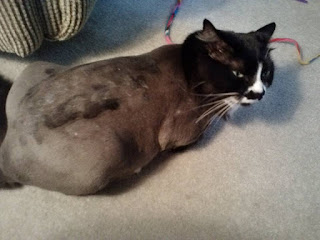 She's pretty much in the need for a kitteh sweater to wear right now. 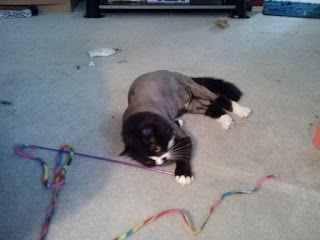 She was not happy about this.

And it turns out the reason why Ocean was getting matted fur was due to her unable to clean off the oils during a cat's natural tongue-bathing. And she wasn't doing that because it seems she still has tapeworms.

She may have had it from being a feral kitten when I adopted her, she may have picked it up from the fleas that were in the townhouse we moved into, I thought I had treated her for the fleas - hadn't seen them since her treatments - and thought she had taken enough of the pills I tried to serve her that the vet gave me. Apparently, Ocean still has the parasite in her. Mal likely does as well (although his fur is fine).

And Mal's hissing at her because the bath and grooming probably makes Ocean smell different now. This afternoon has been a series of hiss staredowns.

It's been awhile since I've done this. Lemme check what photos I have on file: 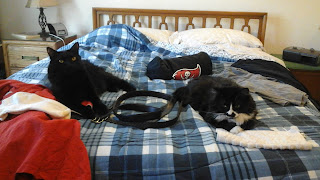 Mal and Ocean overseeing the laundry folding taking place on my bed.

Will that suffice for the month?
Posted by Paul at 1:13 PM No comments:

As part of my professional duties, I attended this year's Florida Library Association conference. This year, due to ALA's Annual taking over Orlando in June, the state group held this conference earlier (March) and in Daytona Beach.

The same week as the bikers rolled in on their Hogs for Biker Week. Well, technically they start this weekend, but you know bikers, they show up early so they can cruise A1A.

So, with all the roar and thunder, we librarians did our best to survive... And thus did I document the atrocities... 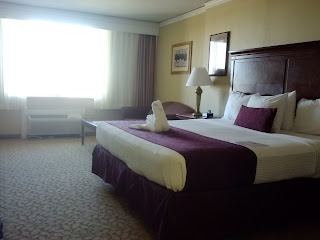 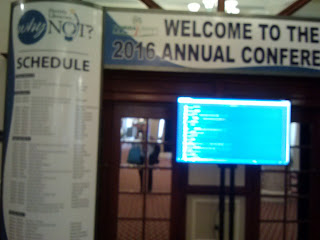 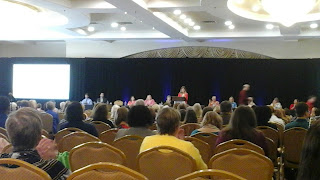 As noted, I'm with the state's Standards committee, and we've completed a revision of Standards and Outcomes (PDF document) that we hope to deploy at volunteer "pilot" libraries to test-run those standards for real-world effectiveness. By next year, we're hoping to pass along the results to the FLA Board and begin applying these standards across the state. With hope, we can use these guidelines to convince the state legislature to improve library funding...
Posted by Paul W at 9:07 PM No comments:

At the 2016 Florida Library Association Conference

Although my Nook Samsung Tablet keeps wanting to autocorrect that to Falcon 2016.

I'm here for some professional development, some socializing, a lot of work with the Standards Committee to follow through on the revisions we made in 2015, and auctioning off book donations from Mystery & Horror LLC for library fund-raising! Thank you, Sarah and Gwen!

Pictures to follow.
Posted by Paul at 5:22 PM No comments: