One of the sadder things about the passage of time is the passing of legends and inspirations. All the actors and performers and motivational figures you knew when you were children do not stay 30 years old, they age as you do, and given how brief our times may be at some point that time ends.

I've been growing up as a Generation X geek, still living that life - I just came back from the 2022 Tampa Bay Comic Con, I will post elsewhere about it - but where I was a child of seven watching Star Wars on screen and Star Trek reruns on TV, a teenager watching Star Trek: The Next Generation, a college student laughing to Red Dwarf, I've aged into a thirtysomething-turned-fiftysomething keeping up with the ever-growing Marvel Cinematic Universe and thrilled as a child at heart as my youthful geekdom gets fulfilled.

But as these years pass, so to do the heroes of my youth, and today came the painful news that actress Nichelle Nichols famous as the USS Enterprise's Uhura died this weekend at the age of no I won't go there (via Mandalit Del Marco at NPR):

Nichols was one of the first Black women featured in a major television series, and her role as Lt. Nyota Uhura on the original TV series was groundbreaking: an African American woman whose name came from Uhuru, the Swahili word for "freedom."

"Here I was projecting in the 23rd century what should have been quite simple," Nichols told NPR in 2011. "We're on a starship. I was head communications officer. Fourth in command on a starship. They didn't see this as being, oh, it doesn't happen til the 23rd century. Young people and adults saw it as now..."

"Trailblazing" is the word they're describing her. I've written before about "Representation Matters" when it came to the likes of Wonder Woman and having characters like Rey emerge in the Star Wars canon. This is what I wrote about the importance of Nichols back in the Civil Rights Era of the 1960s when she played Uhura on the original show:

It cast African-Americans in prominent starring and guest roles: Just having Uhura - despite the seeming meaningless task of "hailing" calls - on the bridge of a starship alongside White men (mostly) in a genuine attempt at ethnic and gender sharing was shocking for the 1960s television market. Would it stun you to find out that Southern television stations back in the day would insist on cutting out any black characters on shows as much as possible? Having Uhura in nearly every bridge shot made that impossible. No less a figure than Martin Luther King spoke to actress Nichelle Nichols to convince her to stay on after she wanted to move on: She was that important a role model...

The NPR article goes into more detail about what happened:

"He complimented me on the manner in which I'd created the character. I thanked him, and I think I said something like, 'Dr. King, I wish I could be out there marching with you.' He said, 'no, no, no. No, you don't understand. We don't need you ... to march. You are marching. You are reflecting what we are fighting for.' So, I said to him, 'thank you so much. And I'm going to miss my co-stars.'"

"His face got very, very serious," she recalled. "And he said, 'what are you talking about?' And I said, 'well, I told Gene just yesterday that I'm going to leave the show after the first year because I've been offered... And he stopped me and said: 'You cannot do that.' I was stunned. He said, 'don't you understand what this man has achieved? For the first time, we are being seen the world over as we should be seen. He says, do you understand that this is the only show that my wife Coretta and I will allow our little children to stay up and watch.' I was speechless."

This was back in 1967, on what was supposed to be yet another television show, a science fiction show representing a genre that wasn't being taken seriously by the academics... but was turning into a cultural phenomenon that redefined fandom and brought the hopes and dreams of the future to the kids and teens who were watching Star Trek. Reverend King saw it and understood, as a Civil Rights leader he knew all about "Representation Matters." As much as he mattered on the political stage, Uhura mattered on the TV screen.

While the role eventually dominated her career - much like her co-stars who had to live with and come to terms with their legacy - Nichols took it in stride and accepted her place as a role model to Blacks, Women, and both as the years went on. Above all, Nichols took up a job working with NASA to promote more Black Women in the sciences to get more of them working in space programs.

In the matter of "Representation Matters," Nichelle Nichols was the undisputed queen. Entire generations grew up to her as Uhura. She defined the role even as other actresses - Zoe Saldana in the reboot films, and Celia Rose Gooding in this year's inaugural season of Star Trek: Strange New Worlds - grew up to succeed her.

Nichols blazed an arc across the stars. I leave you with this, one of her best badass moments in the TOS film series, dealing with "Mr. Adventure" in III:

When the cocky cadet's talk got Uhura's eyes rolling, everyone in the theaters knew he was toast. She was on a five-year voyage, son, and slapped down the likes of V'Ger and Khan. She probably kept him in that closet until Star Trek VI.

Farewell, Nichelle. All our hopes.

Update on the FWA Royal Palm Submissions in 2022

Well, started getting the word back from the Florida Writers' Association on the Royal Palm Literary Awards, where I had submitted five articles from my political blog this year for consideration in the Non-Fiction - Blogging category.

Sad news is that two of them - "The Big Lie and the One Truth," and "Strange Days Inside the Job Lines" - did not make the Semifinalist cut.

Good news is that three of them - "Irrational," "The Tragedy in Surfside," and "Hark! A Ranking of Nirvana Albums" - DID make the Semifinalist cut, and I am hopeful that at least one of those articles can reach Finalist status as well. 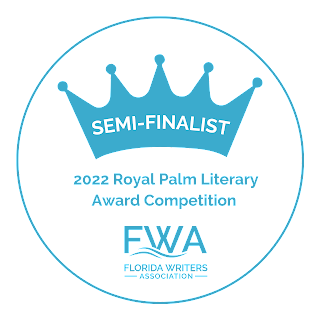 I have to admit the new art logos for the RPLA awards are more eye-catching than the previous banners. Nice...