Five years ago tonight, waiting at an apartment in Bartow for trick-or-treaters that never showed, I instead heard the mewling of a hungry little tuxedo kitten.

So I figured what the heck, it's trick-or-treat, so I go get cat food from the store and come back and put it on a paper plate for the little kitteh to eat... whereupon three other cats jump out of the bushes and eat what's on the plate before she could. Still, I made sure to feed HER since she was the one brave enough to ask me.

And brave she was. And friendly. And wiggly. She'd flop down on the concrete and wiggle back and forth waiting for ear rubs. 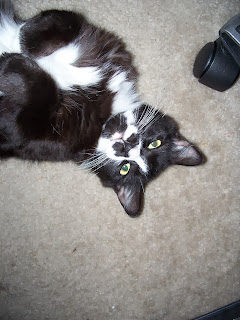 I had just lost Tehya to cancer a week before Halloween, and here I was with a kitten just knocking on the door to come in. And she did come into the apartment, cautious but unafraid, and after a few visits I let her in and closed the door, and she had no problem with that. 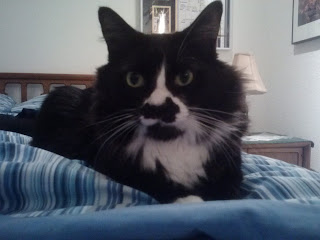 That was how Ocean the Wiggle Cat came into my life. And then later her kittens. 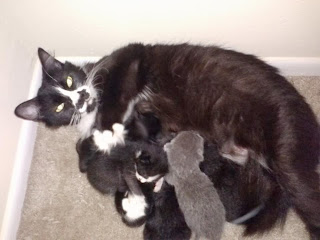 BUT THAT IS ANOTHER ADVENTURE...
Posted by Paul W at 8:54 PM No comments:

Prepping for NaNoWriMo 2018: Starting This Week

November 1st is this Thursday, Gods help us.

That's when I start up the NaNo madness again.

Getting into the final stages of having an idea - one idea out of several I've been working on for months and years - and sticking to it through the 30 days towards a 50,000 word goal.

Need to avoid the distractions.

Need to have a laptop working.

Need to find a positive emotional state, a spark, a muse, a decent scented candle for aromatherapy, whatever it takes!!!

There Are Days I Still Miss Tehya

Tonight is a painful anniversary of letting go of my first kitteh, Tehya.

We want our pets to live full lives, at least live as long as we do, and yet theirs are so brief. What hurts about Tehya's passing was how she hurt, suffering from lung cancer, starving away, mewling in pain... :(

I can't remember how she sounded anymore. I've forgotten her meows for "feed me" or her murmurs for "rub my head." I can still recall how she would come up to me on the sofa, find that spot in my arm as I lay there watching the television, and flop down into that spot with her head arched back for ear rubs and content purring. I fear I may forget that someday... 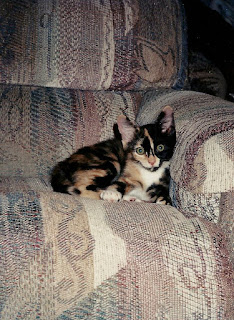 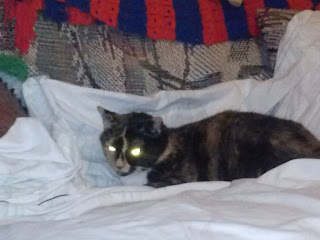 If I Want To Get Serious About Submitting Works

I did learn a few things while attending the sessions at FWA this past Saturday.

At the "Writing and Publishing Short Stories" program, the presenter mentioned a website called The Grinder as a warehouse tracking various publications asking for stories. 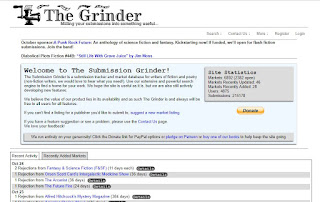 You can search by genre (it has Fantasy separate from Scifi separate from Horror separate from Romance separate from Humor... wait, Humor? Hmmmmm) and by other elements such as fees, royalties, and type of blood sacrifice needed to get accepted. It doesn't limit searches by deadlines, so you'd have to look at each entry to see when things are due.

But here's a good motivator for a writer who wants to get published, and in different locales and different genres. I'll be looking.
Posted by Paul at 8:51 PM No comments:

Getting Dumped By the FWA 2018

Why did they even bother to tell me I was a Finalist for the Royal Palms when I wasn't even going to win an actual award for it?

They're telling me that based on the scoring rubrics, I passed the Finalist grade (yay) but because so many others ALSO passed that Finalist grade (argh) I still REALLY didn't earn a Third, Second, or First place.

Don't tell me I'm a Finalist and THEN tell me I didn't actually win anything.

I was better off just thinking from earlier I was a Semi-Finalist (they told me that first) and not a Finalist, because then I wouldn't have been sitting there at the Awards ceremony getting my guts yanked out.

Email ThisBlogThis!Share to TwitterShare to FacebookShare to Pinterest
Labels: 2018, depressed again, gonna crawl into a corner and cry, life sucks, royal palm, what did I do to upset the writing profession now

Getting Pumped for the FWA 2018

There's a couple of things to note.

I plan on attending the Florida Writers Association's ceremony for the Royal Palm Literary Award. As a Finalist, I'm guaranteed a Third Place at the least (no, it turns out I was wrong about that), so here's knocking on processed wood about making it to First.

I've had some writing awards before: The South Florida Writers group had a short story contest of their own, which I earned a Second Place plaque back in 2002. When I was in Eighth Grade, I won a county award for Palm Harbor Middle for Writing... but that was kinda a cheat because I was the only one who submitted work for it (that was the FIRST year the school was back after the old one had closed 5-6 years earlier). I won Third Place for a Largo Library writing contest back in high school for a science fiction category, and oh what a funny situation that turned out to be...

I'd like to see if I can do well enough to earn a First Place, one that counts against decent competition.

Like I said, knock on processed wood about that.

The second thing to note is that I'm making a pitch to a literary agent at the conference. I don't have much besides some published shorts and a couple of unfinished novels, but the real challenge is making the pitch itself. See if I can argue my case as it were that I'm a viable writer worth finding a readership.

Gotta knock processed wood for this too.

Check my mood by the next post.
Posted by Paul W at 7:06 PM No comments:

This Is A Crazy October So Bear With Me

1) Building up towards another year of NaNoWriMo!

2) I'm awaiting the awards ceremony for the Florida Writers Association and how I do for the Royal Palm Literary Award in Short Fiction this year!

3) Work at the library has gotten intense: I am currently serving as Interim Library Director while the city tries to hire a full-time Library Director (details are messy and we'll discuss it later).

4) This is the first October I plan on not getting door candy or having the lights on for Trick or Treat. It's been five years here, and nobody seems to think my neighbor is good for it. :(

5) I really really need to clear out some short fiction works before I head into NaNo. Using the anthology deadline idea may help.
Posted by Paul W at 7:59 PM No comments: